My crock-pot really doesn’t get as much action as I’d like. I really want it to get out more.

Most slowcooker meals need to cook 4-6 hours. There’s an occasional 8 hours but when I’m gone about 11 hours it just seems like if it has to “keep warm” so long after the cook time that it won’t be that great. I decided to do something with chicken on a Sunday since I’d be able to cook it just the required 4 or 5 hours. I’d be home for the wonderful smells in those hours too! 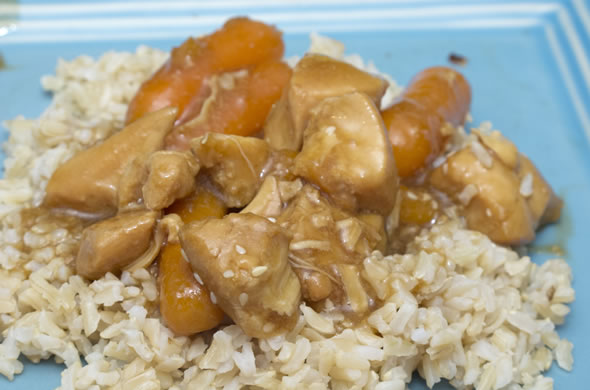 It wasn’t fantastic. I guess you can judge this one on your own. Mr. J wasn’t crazy about it, but he’s just really crazy about sesame chicken at his hometown restaurant and it couldn’t compete with that. This is a good one to switch things up if you’re eating the same things over and over again. 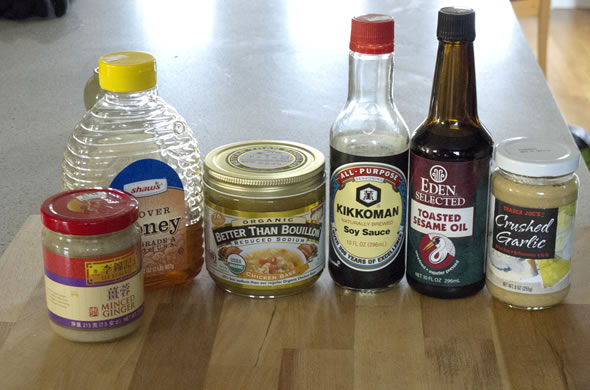 (adapted from Keeping Up With the Joneses)

Cut chicken into cube chunks and add to the slow cooker with carrots. 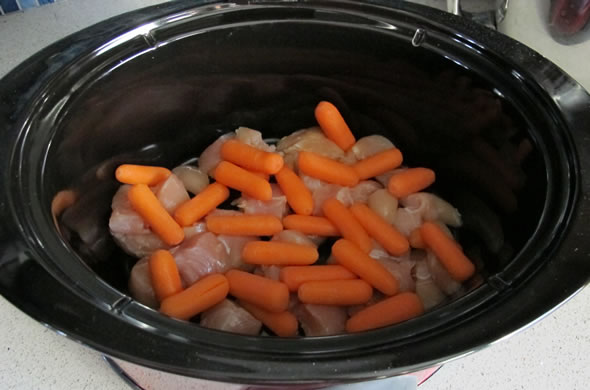 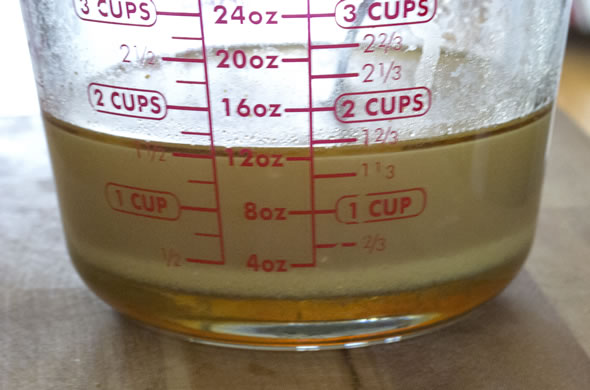 Cook on high for 4-5 hours.
Remove chicken and keep warm while mixing the rest of the sauce in the slow cooker itself or in a pot on the stove.
Mix the cornstarch and water and whisk into the sauce.
Let it cook on medium high for about 5 minutes as it thickens.
Serve it all together and top with sesame seeds. 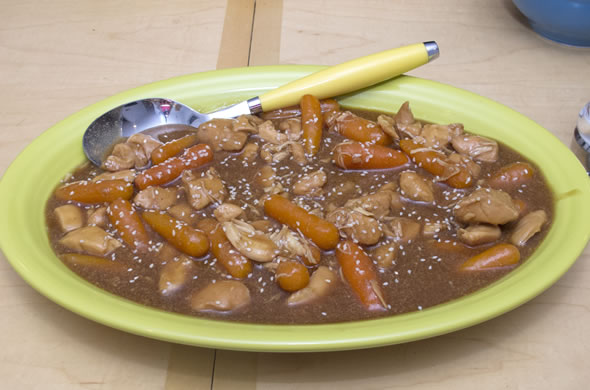 We had this over rice (his = white, hers = brown). I liked that it had some different flavors than we’d had recently, but it really couldn’t beat the deep fried version of Mr. J’s favorite Chinese restaurant.

The leftovers were pretty good the next day for lunch too! I just felt like it didn’t add anything for this to cook that long. I think I could have pretty easily made the same thing, if not better, by adapting the recipe and cooking it to serve, rather than in the crock-pot.

Even non-fish eaters like crab rangoons and all the guest bloggers I’ve had recently got me inspired to use some wontons.

These were a fun app to make at home, and I liked that I had more control of them…which meant that there was wayyy more crab in them than in those of take-out Chinese restaurants. 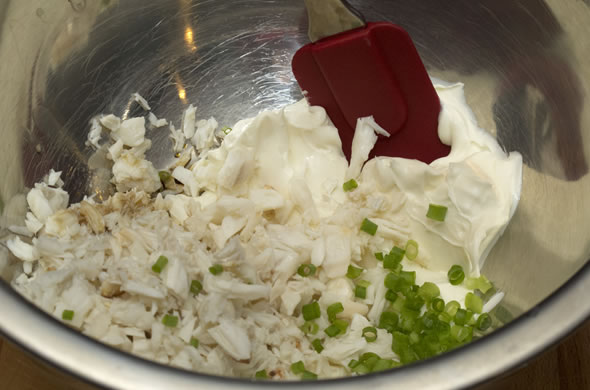 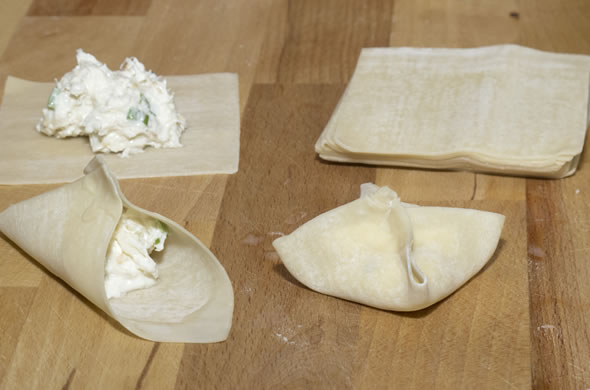 Spray lightly with nonstick spray and bake for 10 minutes. 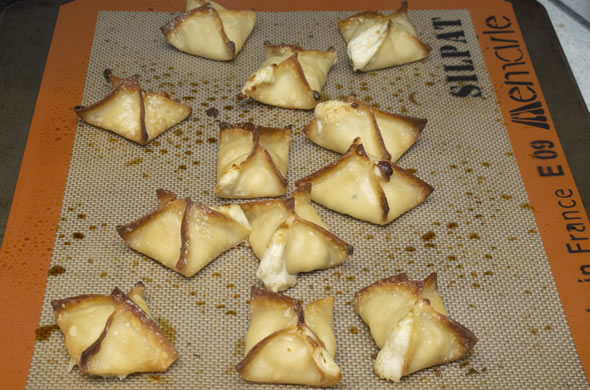 My triangles oozed a bit, but were much crispier. The purses were really cute and ensured evenly filled bites, but didn’t bake up as crispy. That triangular ooze of crisped crab was amazing. Not that I’d ever taste for the sake of presentation. 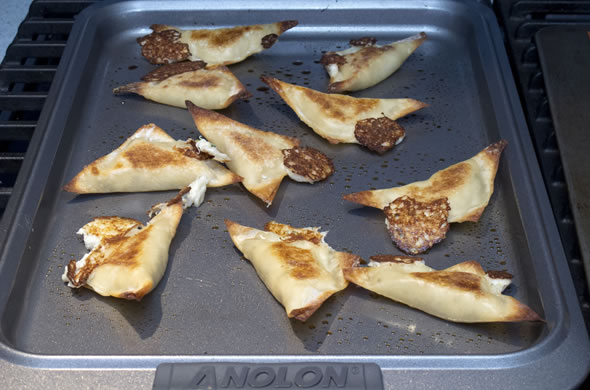 Mr. J LOVES sweet and sour sauce so I bought probably the world’s largest jar at the grocery store (think 40 oz for $2.99). It isn’t quite like take-out Chinese sweet and sour, but I like it better. Want to know the first ingredient? Of course you do! 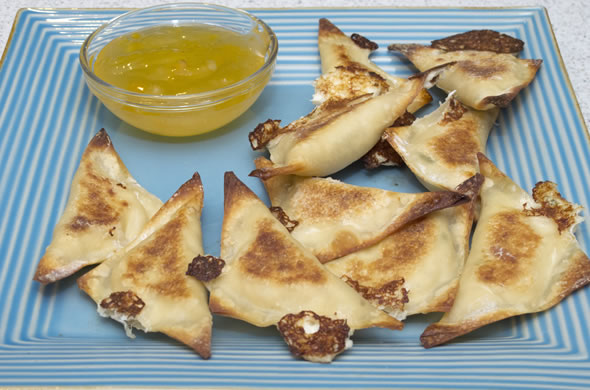 Wow. I never would have guessed. This actually has distinguishable chunks.  I lucked out with the real crab on sale. I bet imitation isn’t bad since that’s probably what the restaurants are using anyway.

This beats my local take-out option which sells about 8 for $8.75, though, they do bring it to my door so that has to count for something.

Today I bring you a guest blog post from a college student in Austin. Joseph Ver is not only learning lessons in the classroom, but he’s learning his way around the kitchen. Without further ado, here he is:

I can give you a long list of my grievances in having to live in dorm conditions, from loud running and screaming in the middle of the night to my heightened mysophobia, but I feel the winner of the worst reason to live in a dorm is the lack of kitchen. I remember dorm shopping with my mother. I was excited to buy skillets and cutting boards, which is possibly a strange thing for a college bound guy to be excited about. Imagine the tears I shed when I found out that the kitchen was on the fourth floor. Nevertheless, I did try to cook tofu curry on the first week of school. It was a disaster to say the least, and successfully kept me away from that kitchen for the rest of the year.

Fast forward to today, a few semesters later, and I am now living in an on-campus apartment. Sure, I still have to hear my loud peers in the parking lot during thirsty Thursdays, but at least I now have a kitchen to myself (and a roommate). Maybe I should have prefaced this post by saying that I have little to no culinary experience. My training has consisted of helping my Filipino mother cook dinner, experimenting with eggs, watching cooking shows on PBS and the Food Network, and drawing inspiration from religiously watching Top Chef. To say the least, I’m a scrappy cook. I’ll find and follow recipes and add my own little twists.

Starting from the beginning of this school year, I’ve tried my hand at mashed potatoes, chicken teriyaki tacos, mapo doufu, French toast with my very own egg bread, and chicken tikka masala among many other dishes. You can probably tell that I cook a lot of Asian inspired dishes. I think my proudest moment actually stemmed from having to salvage vegetables. Now, I’m stereotypical poor college student on a strict budget. Throwing away food does not make me happy in the least bit.

Having bought a bunch of vegetables the week before, I remembered that I had to eat my spare broccoli and asparagus ASAP before it truly went bad. I wanted something more exciting than steamed vegetables, which isn’t necessarily a bad thing but merely something I wasn’t in the mood for at the time. I had bought wonton wrappers and a block of cream cheese when I realized that I could make crab rangoon. Having learned how to make this simple Chinese-American restaurant staple a few years ago at an Asian Festival back in San Antonio, I decided to do my own vegetarian rendition of it with a twist. (Keep in mind that this was me throwing things from the fridge together, so ingredients are approximate and rather spontaneous)

-A pack of wonton wrappers (Found in an oriental store, but your local supermarket may have them)
-A block (16 oz.) of cream cheese
-A head of broccoli, chopped up into very small pieces
-Three sprigs of finely sliced green onion
-Cooking oil for deep frying
-Salt and pepper to taste
Optional:
-Finely chopped asparagus
-Finely sliced sundried tomatoes
-Finely chopped up of any vegetable that you think would fit in a small pocket of fried goodness

This recipe is very simple. Just soften some cream cheese in room temperature, place it in a bowl and mix in all of your veggies nicely.
Now, there are many ways you can wrap the wonton wrapper. The best way is to put around a tablespoon of filling into your wanton wrapper, and fold it diagonally into a little triangle. Seal the wrapper with water. 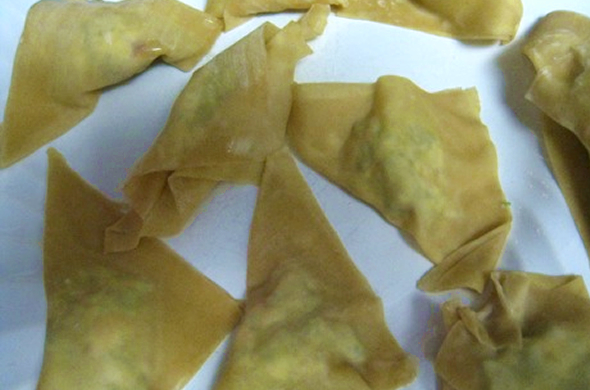 I don’t have a deep fryer, so instead I just put a considerable amount of cooking oil into my wok and fried it that way. 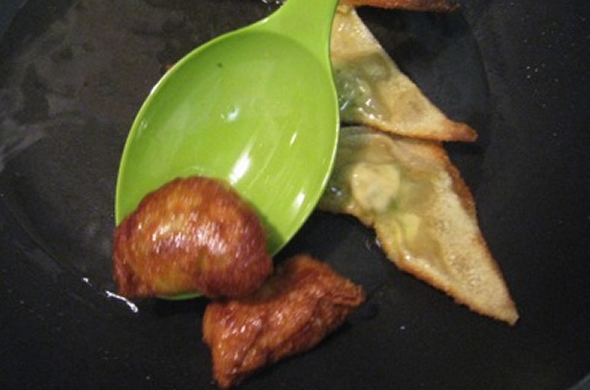 Be afraid of getting hit by crackling oil- it really hurts!

It’s really easy to tell when they’re finished. It’s not like you have to worry about having the filling uncooked and getting sick since it’s merely cream cheese. Go ahead and place them on a plate with a paper towel to cool and enjoy! (One looks like a tiny egg roll, hehe) 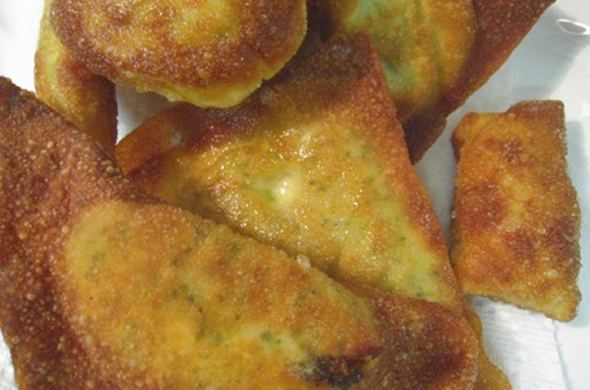 Once again, this is a really simple recipe and thing to make and my main point for making it was to salvage vegetables that were going to end up in the trash in a few days. Are there any other recipes that you make on the fly because you want to save certain ingredients? Let me know!

Joseph Ver is an SEO intern at SpareFoot.com. He attends Saint Edward’s University in Austin, TX and, aside from cooking, loves watching reality shows (Top Chef, Project Runway, Survivor) and befriending various people on the bus. He also blogs when he actually remembers that he has one right here.

It has been awhile since I made an exciting meal that I was really truly happy with. I don’t think my standards were too high, I’ve been busy and a few recipes fell a bit short. I LOVED this. Super flavorful and fresh tasting. The sauce was a great combo of sweet and spicy. It was quick to whip up and made great leftovers for lunch the next day.

In a small saucepan, combine the stock with the soy sauce, sugar, cornstarch slurry, vinegar and sesame oil. Stir to dissolve the sugar. Add peanut oil, ginger and crushed red pepper and cook over high heat, stirring, until fragrant and golden and boil over high heat until thickened and glossy, about 1 minute. Add garlic and simmer over low heat for 10 minutes. 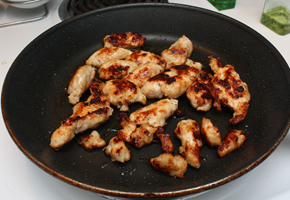 Fry chicken and start boiling water. Flash-steam the pepper slices and pea pods before adding into a large skillet or wok with some of the stir-fry sauce. I got a nifty double-boiler/strainer and it made it easy to flash team then use the same pot of water! 2 in 1! 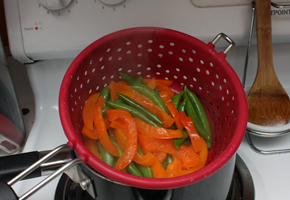 Start dry roasting the cashews separately while water boils for the noodles (or rice if you prefer). Fresh Asian noodles cook for about 10 minutes then they cook for another 2 in the sauce with your chicken & veggies.

Add the sauce into the veggie skillet and add the noodles when they’re ready. Cover the pan while everything combines for 2-3 minutes. Add the cashews right before serving. 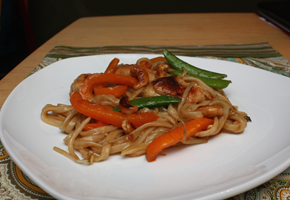 If you haven’t used these noodles you should try them. They are in the produce section of the supermarket and come in Chinese (round), Japanese (flat & my favorite) and wonton wrappers. Regular spaghetti works fine too, but these noodles absorb the stir-fry sauce better. 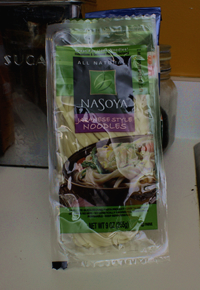 This ended up making about 3 pretty hefty servings. It was really good and a perfect amount of sauce.