Allow me to introduce a guest blog post from Justin! Justin writes:

Lately, I hadn’t been out taking as many photos as I usually do, and when I saw The Fabulous Food Truck Festival advertised on Boston.com, I knew it would be a great opportunity to get some photos and try some local food truck fare.

It was advertised that all items were $7 and under, and that quantities may be limited, so it was encouraged to arrive on the earlier side of the day. I am definitely glad I got there when I did – about 30mins after it started – because it gave me a chance to get some photos and still have time to get in lines for food.

I walked around taking photos for a bit, then decided to get into the line at Grilled Cheese Nation. It was the longest line at the time, so I thought it would be good to get that one out of the way. I also thought it was a good plan to start with a grilled cheese – not too heavy – before going on to something else. I went with the Brie Me Up – Blythdale Farm Brie with sliced local Asian Pear on Iggy’s Organic Pain de Mie Bread. I wanted to go with something a little more daring than a traditional grilled cheese and was glad I tried this. My only critique would be that Brie doesn’t hold up well when melted, so the sandwich looked a little bleak when it was handed over. The flavors were great, though, and I love pear. 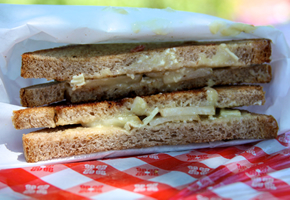 After that, I noticed most of the lines getting longer and longer, as it was around a typical lunchtime by then. I got into the line at The Eat Wagon and quickly realized that the sun was more intense than I thought, as I ended up standing in line for at least 30mins and got a little burn on my head, neck and arms. When it was my turn, the staff let me know that they were out of cheese, and I could wait or have it without. I decided a burger without cheese just isn’t fair, so I waited another 10mins or so. I went with the Eat Burger – Grass fed beef, lettuce, cheese, onion dip, potato chips. I’m not sure if it was the long wait or that the ingredients were that good, but it was a GREAT burger, cooked to a perfect medium as I like it. The onion dip and chips were such a great idea, and a great combination of textures. I normally eat my burgers with blue cheese dressing, so I was especially partial to a burger with a dip for a condiment. 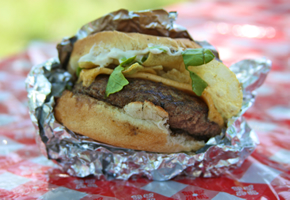 I originally had wanted to get a couple things for dessert – there were cupcakes and a frozen yogurt truck on site, so I had to choose one first. I went with The Froyo Truck first, as the line was a little shorter. By the time I was done there, Kickass Cupcakes had sold out; I was a little bummed that I missed them because I haven’t had them since living in Massachusetts. At The Froyo Truck, I had California Tart, with dark chocolate chips and mango. I would typically go with a chocolate option, but because I don’t regularly eat a lot of fruit, I thought Emily would be proud that I hopped off the normal path and went with a lighter choice. The staff at The Froyo Truck mocked me a bit for getting the small size, but I was trying to eat from as many trucks as possible, and it turns out the small was a little bigger than what I would picture. 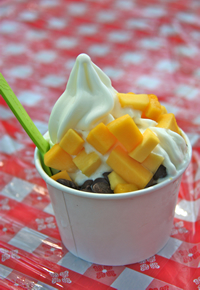 It was a great day, and the weather was perfect. I got some good photos, and got to try some great mobile food. Emily wasn’t able to make it, and I know she would have loved it, so I will be sure to keep my eyes peeled for another event like this.