I began making Mr. J a special Birthday Burger back along the same time the blog started. I’ve made a lot of fun burgers so I have to be sure I save an idea or two when his bday rolls around mid June. This year’s picnic burger was very fun and all about the toppings. 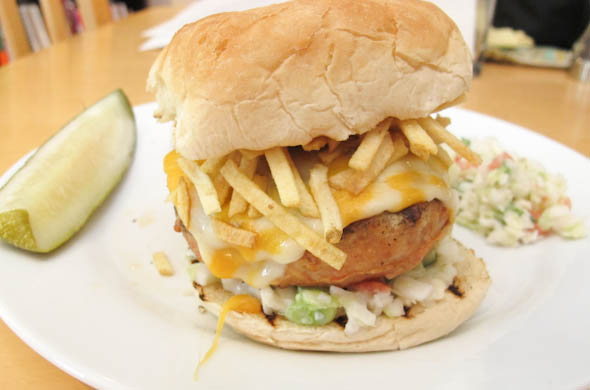 In 2015 it is a Picnic Burger with potato sticks and coleslaw.
In 2014 it was a German Burger with horseradish, caramelized onions, pickles and a pretzel roll.
In 2013 it was a Vermont Burger with maple mayo, cheddar, bacon, and spinach.
In 2012 it was a Bacon Wrapped Burger enough said.
In 2011 it was a Stuffed Burger stuffed with bacon & cheddar or bacon & blue cheese.

I had no idea if it was going to be hard to find potato sticks, or if they’re not just a snack from the 1990s. Turns out, they were just in the snack aisle and I could buy just a single can. It is so funny to me that they come in a can. You pull the plastic ribbon around the top and pop the aluminum top off. Really, opening them is half the fun, but they had so much more potato flavor than chips do. They conveniently stuck to the cheese to stay on the burger while the cole slaw provided a crunch and a creaminess.

One thought on “Picnic Burger”