Readers, please meet Mr. B. He was visiting Boston and wanted to share a guest post with you!

Growing up in Chicago was amazing.  The only problem was that I was spoiled by all of the amazing food Chicago has to offer.  Chief among these delectable offerings is Italian food.  I live in Houston now, and unfortunately, I cannot get really exceptional Italian food in the Lone Star State.

I started my day by going on a Freedom Trail Tour learning about the early days of the American Revolution.  At the conclusion of the tour, the guide asked if we had any questions.  I told him that I had a very serious question: where could I get the best Italian food in the North End?  He directed me to a small restaurant off of Hanover Street called Trattoria Il Panino. I sat in the “giardino” or garden room at Trattoria Il Panino.

Normally I order Fettuccine Alfredo or Chicken Parmesan at Italian restaurants, but Boston is known for its seafood, so I decided to try a special called lobster fettuccine with chopped scallops in a “Fra Diavolo” sauce.  The waiter described the dish as being a lobster-infused fettuccine with a spicy tomato-based sauce.  He further explained that “Fra Diavolo” literally means “with the devil.” 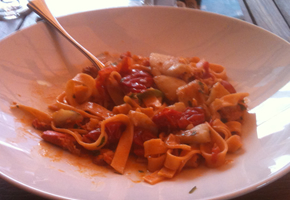 The dish arrived, and I was surprised at the size of it.  In parts of Chicago, you get an overflowing helping of pasta.  At Trattoria Il Panino, the portion seemed small.  Halfway through the dish, it seemed like I had not made a dent in it.  When I finished the dish, I thought I had eaten all of the pasta in Boston!  The dish was very colorful and appealing.  The chef included chunks of lobster along with the chopped scallops.  He also included jalapeno peppers.  The waiter said that this was nontraditional, but the chef wanted to make sure the dish was spicy enough to do the devil justice. 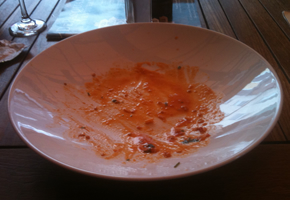 The bread was amazing as well.  That’s one of the things I really miss about Chicago Italian food.  In my opinion, the bread makes the meal, and Trattoria Il Panino offered excellent bread.  I overheard the wait staff speaking to one another in Italian, which added to the ambience.  All in all, I recommend Trattoria Il Panino for its wonderful bread, authentic ambience, and creative dishes.

While I was walking from Faneuil Hall to Trattoria Il Panino, I asked for suggestions on twitter for a place to eat in the North End.  One of my friends tweeted that I should try Regina’s Pizzeria.  I made my way there after first lunch.  For second lunch, I had a delicious slice of pepperoni pizza.  The pizza was a large slice of thin-crust pizza.  The pizza was dripping with pepperoni, cheese, and grease.  Although it wasn’t the healthiest choice, it sure was delicious. Predictably, the entire restaurant was packed with to-go orders coming in frequently and hungry patrons waiting outside for a table to open up. 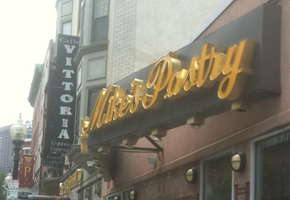 Another of my friends wrote on facebook that I should go to Mike’s Pastry for dessert.  I had no idea what I was getting myself into.  Mike’s Pastry has two long large display cases with just about any type of pastry you could possibly want including cannolis, cupcakes, and Boston cream puffs.  They were super busy.  They had at least six employees taking and filling orders and couldn’t keep up with demand. 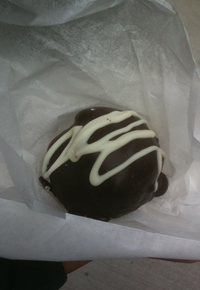 I decided to go with a Boston cream puff…since I was in Boston!  The puff was very large with a Boston cream filling and a dark chocolate shell with white icing.  The amount of cream was overwhelming.  I think the puff should have been served with a spoon, so you could eat enough of the cream to make the proportion of puff and dark chocolate to cream a little more manageable.  I was able to make a complete mess of the situation with cream all over the place!

Finally, I made my way to Gigi Gelateria for some gelato.  What’s a trip to an Italian neighborhood without some gelato?  I chose a small cup of mint chocolate because it’s my favorite.  The gelato was overwhelmingly minty.  It was even a little too minty for me, and that’s saying a lot.  Other than the mintiness, the gelato was very smooth and creamy.  The small cup was also a very healthy serving.  I was unable to finish the small cup.  The furnishings were very contemporary and did not fit into the mold of an old Italian neighborhood.  When I was inside, I could have been anywhere in the country that sells gelato, but not specifically Boston’s North End.  I think my next trip to Boston will include a search for better gelato in the North End. 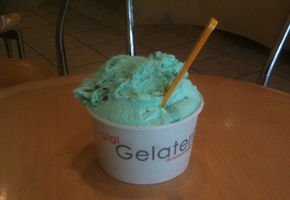 Overall, I have to say my experience in Boston’s North End was a success.  Hearing people speaking Italian as I walked through the neighborhood reminded me of some of the little Italian neighborhoods in Chicago.  The food was authentic and excellent.  I give Trattoria Il Panino, Regina’s Pizzeria, and Mike’s Pastry A pluses for their outstanding cuisine and neighborhood charm.  I give Gigi Gelateria a B- for the overpowering flavor and lack of neighborhood charm.  I am anxiously awaiting my next trip to Beantown!