I was intrigued by the title. I know not to judge a book by it’s cover but this one was too cute to pass by. 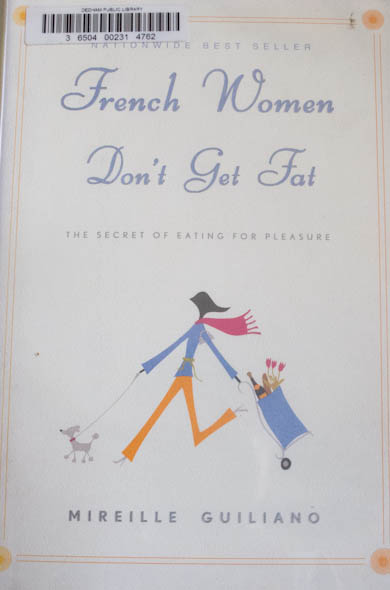 I honestly thought this book was going to be a bit more about culture and eating while being less about not-eating and recipes. I guess it was more about food and lifestyle but the recipes didn’t interest me at all and I skimmed past them. I was shocked that she reccomends some crazy-sounding detox of Magic Leek Soup. Apparently French ladies swear by it, but it sounds just like what she’s trying to go against: fad diets.

The author is French, but mainly lives in NYC now, so her credibility is intact of growing up in France but definitely knowing what Americans eat. It starts with tales of her upbringing, her foreign exchange to Massachusetts, and returning to France overweight and then getting more overweight when she moved away to Paris for college. This was when she learned to consider food, exercise, and habits. 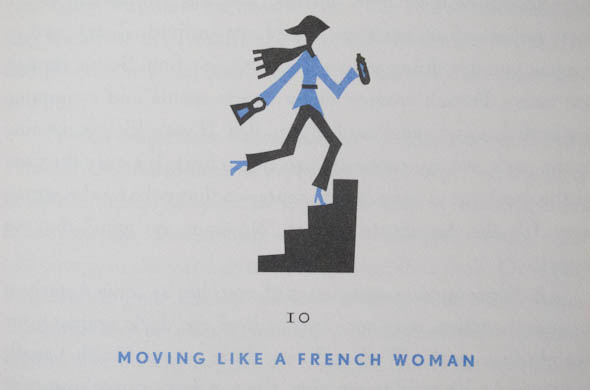 Her suggestions are common sense based (minus the detox of leek soup). She suggests writing down everything you eat for 3 weeks. Lots of diets suggest this. There are apps galore and it definitely sounds like it would be helpful to some people skipping snacks to avoid having to write it down. She wants the dieter to be able to focus on when you’re eating and what you’re eating. She then goes all-in on this 48-hour diuretic of leek soup. I cannot get behind the 2-day detoxing of eating one thing. I am doubtful any dietician would suggest this either.

I do think it makes a ton of sense that she breaks the new ways of thinking about food into 3-month periods. That seems like a justifiable time to change, adopt new habits, and makes it not a crash diet. Her tips are normal, like decreasing some “demons” so that you aren’t cutting them out completely and being more focused on eating more different foods, appropriate portions, eating more fruits/veggies, focusing on seasonal foods, moving more, and drinking more water. All these things make sense, and none would shock anyone wanting to be healthier.

The water is a big one. She writes a ton about water. I’ll pause to sip my water because this really resonated with me.

I don’t normally have any water when I wake up, especially before coffee. I also don’t tend to drink much after dinner. I think I drink a lot during the rest of the day, but these were easy times to drink more.

I looove her suggestions about not cutting out the things you love. She adores dessert and french pastries. I think cutting anything out completely is going to make many people reallllly crave it. Her point is very clear for French women with chocolate and wine. They tend to love chocolate and eat it regularly, but eat high quality and small amounts. That makes it seem really do-able. They also keep in check by making up for one day on the next. Again, seems do-able.

It was interesting, easy to read, and a quick read. I don’t think it is life changing, but I’ll keep in mind the water tips and the focus on eating more different things rather than bigger portions of fewer things.

I’ll leave you with this video. I doubt any Paleo-dieters read my blog but this archeologist explains why the fad diet is really all made up, by people who don’t know about what people in the Paleolithic period ate, let alone how diets would have differed by area of the globe. It’s fascinating. Yes whole foods, and real foods are better for you. Nobody fights you on that. I just tire of people thinking that the’s a magic new approach to food.

some other books for foodies I recommend: Kitchen Confidential; Heat; French Kids Eat Everything; The American Way of Eating

any foodie inspired books you suggest for me?