Kitchen Confidential by Anthony Bourdain is my most recent foodie reading.

Anthony Bourdain can definitely rub people the wrong way. I have this likeable/badass impression of him. To me, he seems like the kind of person who you wannnnnt on your side and you’ll have his support for life. I also think if you cross him you should just disappear on your own. 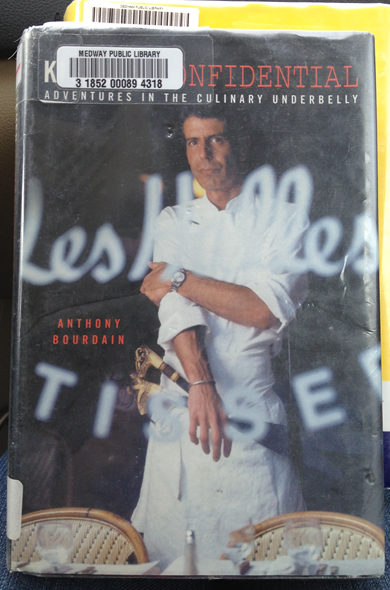 He reminds me of my old 7th grade math teacher everyone was terrified of. She actually was pretty fun, and she loved me. I think with her help, it was the first time I ever understood math. Those who hadn’t earned any compassion from her, dreaded her voice and class

Do you agree? Is he obnoxious or likable to you?

I read Kitchen Confidential and loved it. He writes like he talks! I have loved No Reservations for years and I can’t bear to see him at a judging panel on The Taste, that is not how I picture him. This account of the ‘Adventures in the Culinary Underbelly’ gives some good background to his interesting ways, the lessons he’s learned, and where he’s come from.

He writes, travels, and eats. I loved learning that he got his start in Massachusetts! He was trained at culinary school before that was such a thing. He started out so young and so enthused. He has such a way to describe some of those unique moments.

I really felt like his first few endeavours were good reminders about growth and progress with successes scattered in. I bet looking back he appreciates those opportunities for what they were, even now that he’s a big shot.

I haven’t worked in many restaurants, but the two I spent some time in definitely helped me picture this culture of the different cultures and the hierarchy behind kitchen doors. It is true! A restaurant and catering company I worked at was known for Jewish specialties that the neighborhood swore by. Who made ‘em? A Chilean guy was the only one allowed to make those matzo balls and noodle kugel. The seasonal fried clam and ice cream shack had a group of guys who couldn’t get drivers’ licenses but where somehow all related or connected. Those guys were much harder workers than some of the slacker 16-year-olds who hadn’t ever used a broom before. 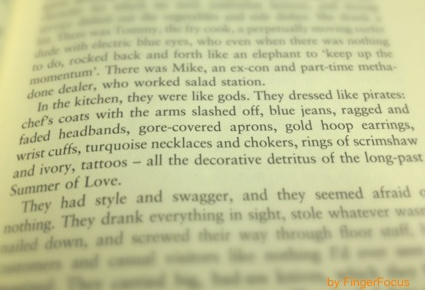 (I loved his passage, especially since I love pirates)

There were moments when I wanted to cheer right along with what he says. He reminds diners that eating Sunday brunch somewhere that isn’t a breakfast place means the B-team, not the famous Saturday night dinner chef, is whipping up your eggs benedict. Also, that the specials are either something the chef came up with to help with food costs or, it is something the chef would like to move along out of the walk-in before it goes bad. SO TRUE!

I think he’s a bit introspective by nature, but I enjoyed that. He dabbled in some intense habits which he references on his shows too. It is probably a good perspective (and PSA) for young cooks who are having that much fun, spending all their money, and who can be great, if they just know what the heck is happening around them.

Google just showed me it was a short TV series circa 2005 with Bradley Cooper. Umm Bradley Cooper in the kitchen? Yes please! Excuse me while I search Netflix for it…