We’re now closer to Cinco de Mayo than Easter, but I’m just now catching up.Some things have to be absolutely the same. My Easter basket is one of those traditions I need. During Easter my first year of college I unexpectedly received a replacement basket for Easter at my parents house! GASP! I don’t dramatically overreact too often, but that was one of them. Dad ended up on a chair or a ladder pulling baskets down until we had the right one. Phew. It was iffy. 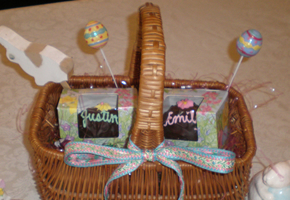 Another tradition inside that basket is a dark chocolate egg. I get coconut creme and Mr. J gets fudge, with our names written on top.

Easter dinner was hosted at my sis’ house. We have a fantastic meal and she’s becoming quite the chef! Check out her tablescape! She’s all about the seasonal decor. (She also loves making trifle and I’m impressed with her creativity to use the trifle dish!) 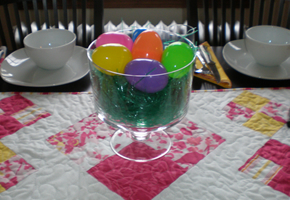 I made a dip- more about that later.

Our first course was a Baked Potato Soup from Cooking Light. The traditional loaded potato items were on the side for a garnish which made the soup itself a bit lighter since it didn’t include cups of cheese. 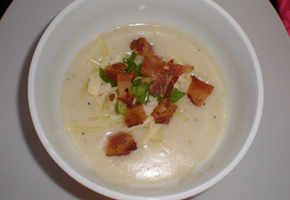 The main course was a Tuscan pork roast, zucchini and corn saute, and a sausage and sourdough stuffing. 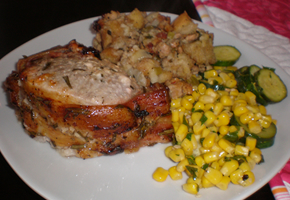 The pork roast had rosemary, garlic, and it was delicious. Sis didn’t like the zucchini and corn side dish, but I did so I took the leftovers. It had some vinegar and I thought it was fresh and tangy.