If your holiday season was anything like mine it included goodies of all kinds, and often. Here’s a journey through the last few days of family, friends, and FOOD.

A holiday gathering with friends was made more special with delightful holiday beer. Of course they had the regulars as well but I’m a sucker for seasonal beers. I thought it was a really nice touch to have a few seasonal varieties on hand. 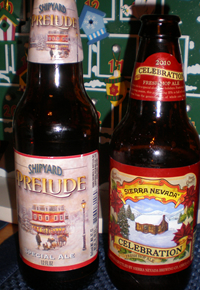 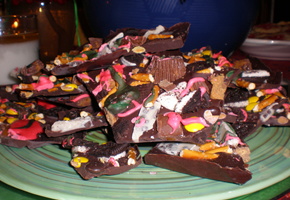 Lastly they served roasted chestnuts! I hadn’t ever had them but fell in love. They have a real woodsy flavor. They are meaty and substantial. A little cut on the bottom made them easy to pop right out. Check out how nicely the bowl complimented the nuts too! 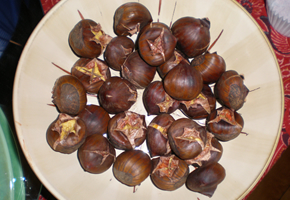 Ok, lets move on to some holiday meals. Breakfasts are my favorites. Christmas Eve was already my 2nd day of holiday celebrations with the C family and we had a crockpot scramble dish including ham, egg, cheese, and shredded potato. We also served Ebelskiver (translation: dutch filled-pancake). These are tasty and really fun. Mr. J is a master at turning them so he did the honors. We filled them with raspberries, banana, and chocolate chips. More than 3 options just gets confusing. 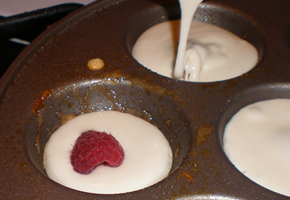 The pan only allows for a few per batch but we found out the first time making them that this is probably all that we could keep up with at a time anyway. Williams Sonoma makes fancy turners for $12.95 but bamboo skewers work just fine. We kept them warm in the oven while making the rest. I’ll post again about these…they’re that good. 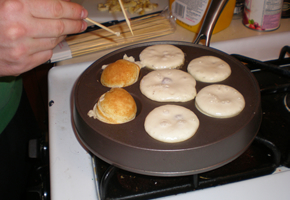 After discovering a Christmas journal from 1987 we realized the R fam has been eating a traditional Christmas breakfast since at least since then. It is a casserole (to be made the night before) with rice, eggs, velveeta, ham, and asparagus. It’s delectable and nobody is ever ready for a change. 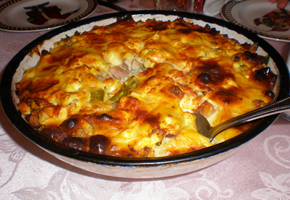 The other benefit is that it just gets popped into the oven while gifts are in progress and nobody misses anything! We also have a partridge and a pear tree, minus the partridge. Though I’m not sure why, the top of the tree gets a sugar cube with a drop of flavored extract lit on fire for a second. 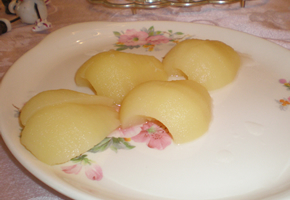 Dinner time? There’s no set tradition with the R family so this year we had ham. Yum! Sides included the best sausage stuffing ever, creamed onions, green beans, and a baked fruit on the side. 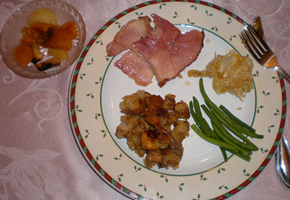 Check out the BLT skewers I made with Mrs. C. She brought them to church on Christmas Eve and they were such a hit. How is it that I’ve never had super thick cut bacon? I’m now enlightened. Wow. We cut one end of the grape tomato off to make it stand better. 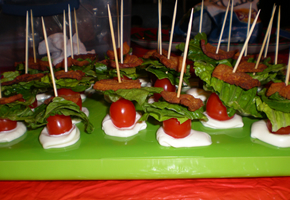 One last delectable thing I ate (and ate) was sis’ sticky buns. The recipe will follow soon! Hope everyone else had great meals too!