Our little one is an eater. He’s seriously into food and has quite the appetite. I can’t get over how much food he can put away! I’m no expert, this isn’t a how-to, all kiddos are different but here is what’s happening in our kitchen/at our table at this season of our lives. Let’s start with the fact that he’s into food and doesn’t question different textures- that’s him as a person. I’m coming at mealtime from my own perspective, not a one-size-fits-all with a hungry kid who likes to eat and as a Momma who values food, cooking, and meals. This guy forgave us after the first 5 weeks of life when he really would have benefited from a supplement of formula sooner, and has been eating non-stop ever since. Fed is best, but that’s another story. 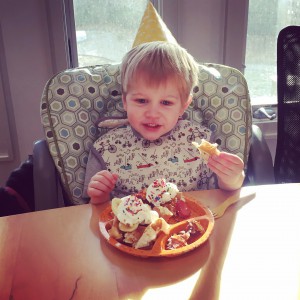 On weekends, he eats breakfast soon after waking- often 8ish. His bfast of choice is waffles/dry cereal/toast and fruit. Mid morning milk. Lunch is mid-day. He’ll always pick peanut butter & jelly, if available, with tomatoes/cukes/apples etc. After lunch he has a little digestion time and then a 2-ish hour nap. Milk after the nap. Dinner tends to be somewhere between 5:30-6:15 with milk before bed, and he’s in bed @ 7:30ish. We don’t offer snacks so he doesn’t really ask for them – milk is pretty much fulfilling this. Sometimes we’ll offer a snack if he’s up earlier from the nap, also if we’re going to go out for an errand or something.

Weekdays he’s up earlier and daycare does a mid-morning snack and an after-nap snack usually. I wonder if since we’ve packing lunch at daycare his whole life, that has been part of him knowing he can only eat what’s served- no substitutions.

We’ve worked hard to give him what we eat, without substitutions. The motto at our table is “you don’t have to eat it”. He doesn’t have to finish anything but there’s no substitutions. We caught ourselves when he was smaller sometimes adding to his dinner if he wasn’t eating much. He also noticed and we nipped that. I do think we’re mindful of there being a few things on his plate, and we know what he’ll definitely like- like a random raw veggie I’m assured he’ll eat. We point out what each thing is so he’ll have the vocabulary of food and to have a second to see & understand what the meal is. I’ve tried to be in the habit of saying “you’re not hungry for eggs right now? maybe next time.” versus “you don’t like it?”.

Most days we all sit for breakfast together- each eating whatever our breakfast of choice is. Most nights we all eat together. If possible, I give him a head start since it takes him longer. I’ve been working hard to prep most dinners in advance so there’s less to start on weeknights at 5:45pm and so he can start, and Daddy and I join in and eat the same thing when he’s home off the train. One weeknight per week we do “anything goes” so we might eat different dinners – leftovers/eggs/something quick. Friday nights are takeout & DVR for the grown ups so he’ll eat first and we eat when he goes to bed. We cherish this ritual- as much as cooking and eating together.

For us, parents decide what’s for dinner, and when dinner is. Our kid can decide which things he wants to eat, and how much. He can have 2nds, 3rds of anything but not anything different than the dinner. Holidays/parties/etc all bets are off. I notice he eats less at a bigger family meal, but that’s fine.

He likes to be on a stool at the counter. Sometimes he can “help”, like putting the chopped veggie from the cutting board onto a pan to roast. I show him foods as they’re cooking. It is important to me that he sees what something looks like raw, or the stem, etc. Just the other day I gave him an avocado pit to touch- he thought it was hysterical. To get into the mindset of the meal being ready, often we’ll have him pick his plate/bowl which he can reach. He doesn’t get to decide what’s for dinner, but he can choose a plate. Here he is “taking a picture”….wonder where he got that idea 😉 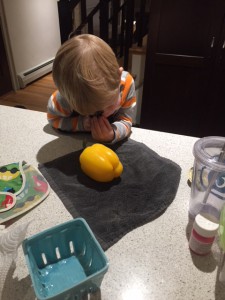 He’s in his highchair pulled up to the table. He needs the reminder to use his fork/spoon. I’d estimate he eats 80% of foods with silverware. Most meals he needs reminders not to play with any food, and to keep his legs down and stay pushed in. For now, he doesn’t mind at all to wear a bib. Because of our dogs, we strive for all food to be eaten at the table, still sometimes the lab needs to be separated from eating crumbs off the toddler’s lap the entire meal!

Pasta, avocado, beans, peanut butter & jelly sandwiches, waffles, rice, yogurt, feta cheese, all fruits, tomatoes, cucumbers, carrots, sweet pickles, muffins, mustard, applesauce, quesadillas, and the list goes on. He’s less interested in meat at the moment. Eggs are hit or miss. He finds lettuce hard to chew. Below he forsake the fork for his Christmas dessert of cheesecake with cherries. 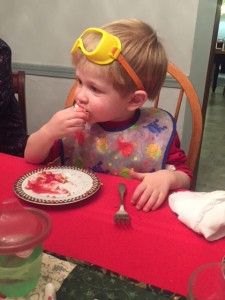 I shoot for variety for us all, but for him especially. I want him to see that foods he likes can look different. Cheeses, pasta shapes, rice/grains etc don’t just look one way, and we don’t only eat them with one flavor. It was messier, but I gave him tiny soft tacos the other night and he did great holding and biting them. I wondered what he’s think about a white bean/tomato/spinach thing with polenta and he ate soooo much of it. As much as I want him seeing and experiencing new food, he still surprises us with what he’s into sometimes.

Sunday: was the Patriots playoff game so we had “sports snacks” Cheeseburger Layer Dip & raw veggies with dressing.
Monday: White beans with tomato sauce & spinach and polenta cakes – he went to town and ended up eating what would have been my leftovers for lunch!
Tuesday: Tacos (mine = ground pork, T & Daddy = ground beef) with avocado, tomatoes, cheese, salsa inside, and some Mexican Street Corn on the side.
Wednesday: Rigatoni with creamy tomato sauce
Thursday: Chicken wraps with sweet potato fries
Friday: takeout for us parents and something easy- maybe a quesadilla or mac & cheese for T.