I sometimes forget that the crockpot is actually really ideal for summer meals since it doesn’t heat up the whole house, annnnd it means dinner can be less fuss when it is just too hot to think. I hate being hot. I love the snow and can’t imagine regular triple-digit-temperature days. Some crockpot food is really heavy and winter-ish but I want to keep looking for those that aren’t. I hadn’t ever made mole before but it was good, and something different. We had them as tacos but the poor pups had to smell chicken cooking all. day. 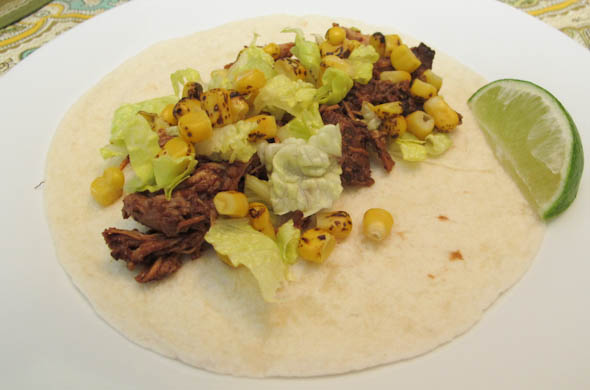 I saw the slow cooker chicken mole recipe in a Cooking Light magazine and loved the idea of chicken thighs cooking all day and making a different type of taco. I decreased the chipotle chile in adobo to just 1 (instead of 2) in case it was too spicy. I didn’t have smoked almonds, but used some mixed nuts and thought it was pretty good. I’d add a bit more water to the slow cooker…mine was on low for 8 hours (as instructed) but part of it got kind of burned along the edge when it got too low.

It was good, maybe not my favorite taco ever, but the flavors were nice. The chicken had a light smokey flavor and the cocoa made it have a light earthy taste.

I froze the leftover chicken and corn. I’ll assemble some burritos to wrap individually and freeze for the next time we need an instant dinner. Or it’d be good as some nachos too.

I froze some blobs of tomato paste the last time I opened a can. Then for recipes like this I just pull one blob out and nuke it in the microwave since I rarely need a whole can at once…even though the cans are itty bitty.