I was racking my brain for what to make for my Boston visitors. There were 6 of us and I wanted something everyone would like and that wouldn’t be too tricky to pull off while still getting to see everyone. I decided on calzones and now, it’s official: they are my signature dish.

I figured for 6 people I could made them ahead of time and warm when folks arrived. It turned out I was too distracted by wedding invitation stuffing to make everything in advance, but I busted out a few  tasty new ones alongside a previous favorite.

I made turkey meatball, spinach, and mozzarella as I’ve made before. I called it the “North End’er” for my guests visiting Boston.

We also had a sausage, red & yellow pepper calzone called “Fenway Favorite” which was a big hit. 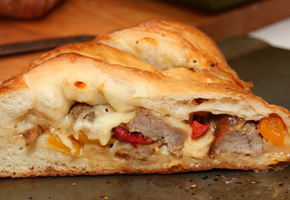 A new one was broccolini & cheddar I called “Cambridge Common” 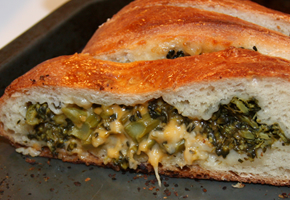 and a BBQ chicken and caramelized onion “Houston Misses You” calzone. Does BBQ chicken relate to any area of Boston? I was stumped on connecting that one. 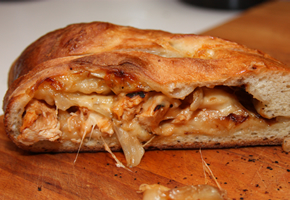 Marinate the chicken in BBQ sauce before grilling it. I made some BBQ sauce before hand but any kind you like would be fine
Fork apart the grilled chicken and slather with BBQ sauce
Chop the onion and caramelize in a skillet
Sprinkle chicken and sauce, the onions, and cheese onto half of the dough ball
Repeat until it seems like WAY too much (trust me on this)
Close the calzone and make some air slits on the top.
Brush with eggwash and bake at 425 for 20 minutes

I liked it a lot. Probably because I knew I had made the sauce. It was so easy! I also added in a few bottled sauces with too little left to use productively. Liquid Smoke was new to me but adding some in made a nice touch. I wasn’t as meticulous as usual about getting filling all the way to the edges because I was chatting. I’m shocked that I got all 4 into the oven at the same time (2 on one pan)!

Guess what I’ve been eating for lunch this week!