While this remains a food blog, I figured some of what I have to say is now related to the little babe and I’m thinking I might share them occasionally. I make the rules, right? 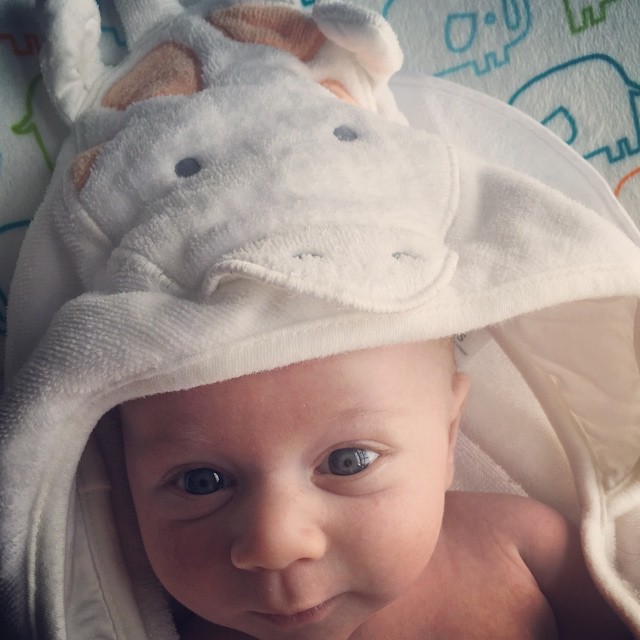 1) Fresh foods
I had seriously stocked my freezer (see some freezer food favorites, or freezer friendly foods) but one of my first chances to leave the house for a minute was spent hitting the grocery store. I was seeking fresh things like veggies to dip in hummus, grapes, bananas, yogurt, juice, carrots, cukes, guac, etc. I never really knew what to bring to moms of newborns when I would visit them. I’d highly recommend stocking them up with those perishables and real foods they can munch on. This could be a post all by itself.

2) Stocking up on normal essentials
Kind of unintentionally, Mr. J and I acquired an Amazon Prime account. It has been a huge help, especially in the first month and even while we prepped for our newborn. I’d now tell anyone who’d listen to stock up on everyday items to eliminate one more thing to have to think about. Between Amazon & Costco, we loaded up on things like kleenex, coffee, toothpaste, cleaning products, toiletries, laundry detergent etc. I didn’t want the first blurry month to involve emergency trips for (insert daily used item here). We also discovered things we wanted more of and it was so great to just order and not have to think about again (some of those things included: more pacifiers of the kind he liked, more bottle pieces once he was accepting of those, etc).

3) It is hard, then easier, then harder (and so on)
The first time doing everything was confusing and awkward and meant establishing a process or figuring it out. Then we thought we had a rhythm at 1.5 weeks, then at 2.5 weeks we were back to feeling like “what the heck is going on”. I imagine this ebb and flow will continue. I was under the impression that the learning curve would be steep but then you’d be more coordinated. Turns out, just when you think you’ve got it, everything changes a bit. I also don’t think anyone told me it was OK to think it was really difficult. Physically it is hard. Emotionally it is hard. Nobody really told me it is OK to be thankful/grateful/in love but also to just find it so freaking hard.

4) Duplicates versus singles
Looking back on the first month I think there were a few things we didn’t need duplicates and a few other items to have plenty of.
just a few: we have upstairs & downstairs diapering areas but didn’t need many changing table covers since we topped it with a liner. He doesn’t have too many pairs of socks because most of his clothes have feet, plus, his tootsies don’t ever touch the floor. I wouldn’t get as many pants for the next go-round because it seems easiest for us to put him in one-piece suits as a newborn with the number of diaper changes he has.
need a lot: I thought we had millions more face cloths than we needed, but turns out we used more than I expected. I also don’t think we could ever have too many burp cloths. Anything that extends having to do laundry was greatly appreciated.

5) Make the most of a baby’s nap
There were times when my little bundle would eat every 2 hours. The time it took to feed him, burp him, change him, then settle him, then meant it was pretty much time to start again. Other times he’d sleep for longer but I didn’t always know how long. I realized gazing at him sleeping was sometimes going to mean at the end of the day, (when I was most tired) I’d have a feeling like I did nothing the whole day. For me, I learned I needed to have some tasks on my to-do list or even some things I could do when I had a few minutes. Adding library books onto my kindle, cleaning out some emails, scheduling a doctor’s appt, making a grocery list, cleaning the bathroom, unloading the dishwasher, a yoga video, etc made me feel a bit more productive. I need productivity. Plus, daytime TV is pretty terrible.