Once upon a time, Ms. S wanted to bring something to a weekend away with friends but what would travel well on a bus from NYC all the way to the far away land of Massachusetts?

BEER BREAD (mix, to be made on the spot)

It was such a great idea. It was easy, goes with everything, didn’t take up room, and didn’t create any leftovers! Yum! I was new to the world of Tastefully Simple but it sounds like fun and I’m glad to be in-the-know (recently I was feeling old/out-of-it after having to google flash mob).

1) Empty mix into a big bowl 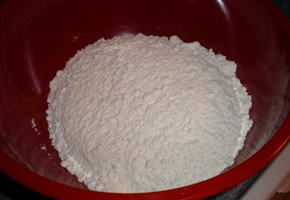 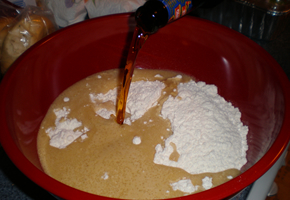 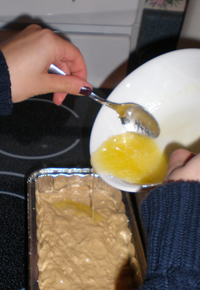 4) Bake according to package 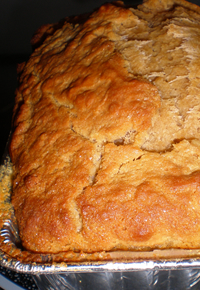 I hesitate to share the commotion this bread caused before telling you how yummy it is! We loved it and ate it all. For beer Ms. S chose a winter beer which was great, thought I hadn’t had it anyother way. The buttered top made it crispy and delicious.Ok, so, we’re in a rental house with a full kitchen. Ms. S followed all instructions perfectly and baked it until she realized the oven was smoking. It smelled like chemicals so we fanned it out, wiped the bottom of the oven, let it cool and turned it back on. It seemed fine at first but the smoke came back! It was crazy, let me tell you. One of us would open the oven and stand back from the fumes, another one would hold a small fan pointing into the oven, three was taking photos, and four was opening doors and fanning the smoke detector.

The smell was very intense and the property owner had to come over to look at the oven. We still attest that it wasn’t our fault. We THINK the previous tentant may have used oven cleaner on a self-cleaning oven (serious no-no).

Anywho, it baked part way, then the oven had a hissy fit then it baked more. It didn’t taste like the smoke at all and turned out fine. We loved it and hope to have it again!

One thought on “A Tasty Catastrophe”