Miss L had me over for a delicious dinner. She made Baked Pasta as a deviation of Martha’s recipe. Ours didn’t include chicken sausage but Miss L has made it with it, or with chicken instead. The possibilities here are endless.

This was so good because of the strength of flavors but none were overpowering. Baked pasta warms the heart, especially in pink sauce with fontina. Yum!

Miss L was the perfect host by laying a premade dip (thanks to Trader Joe’s) and pita chips while dinner spent the last few minutes baking. Miss H poured the wine and the night began! 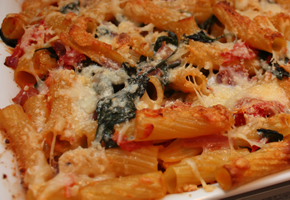 This dish reminded me I don’t eat enough rigatoni or enough pink sauce. Martha kindly reminds her readers this makes enough for two smaller pans (to freeze one). The noodles were cooked perfectly and they absorbed the right amount of sauce to keep the flavor throughout.

I really liked this dish and thought it would be a great one to share with friends because this dish actually enables the host to enjoy the guests while it does it’s thang. There’s nothing worse than missing your company because you’re stuck in the kitchen.

One thought on “Pasta with Home Baked Goodness”