After majoring in English and Journalism in college it always annoys me when companies misspell words to be catchy. Tasti D-Lite? Yikes! Grammatical errors are the same. Toys R Us? Come on!

I put that aside and eat their ice cream none the less (Tasti’s ice cream, not Toys’). Boston got it’s first Tasti D-Lite a while ago, but I hadn’t been other than in NYC. When I saw one in Florida I knew it had my name written allll over it. 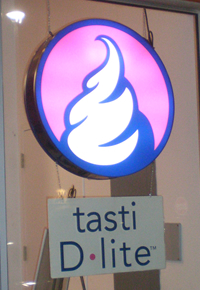 I scooped ice cream, for a living, as a summer job in high school so I sympathize when ordering ice cream especially if they have to sing, dance, or wear funky uniforms. Their staff don’t have to lean head-first into freezers so I only felt so-bad for them. Luckily my ice cream was just ice cream so there was very little explaining to do whereas they have to teach customers what it means. 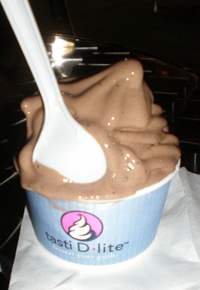 I got mud pie…which wasn’t the best ever. I felt guilty asking for a sample but I probably should have gone with the Cinnamon Crunch or Toffee Crunch which I just assume I’d prefer.

Mr. J got cake batter with fudge and vanilla crumbles. I thought his was super sweet but he liked it enough even though soft serve is more my thing than his. He leans towards regular ice cream but as Mum would say he could “choke it down”. 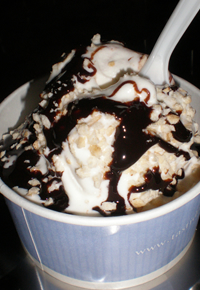