I saw this pizza topped with a pistachio spread and sausage from Don Antonio’s of NYC on Diners, Drive-Ins & Dives and was instantly excited by the pistachios on there. Apparently I wasn’t the only one either.  I only tweaked it a bit and thought it was great for a change of pace. 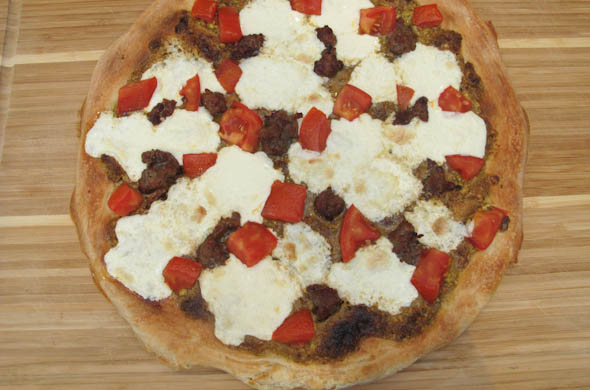 The pistachios up the price of making this pie for sure, but if you compare to a trip to NYC to have the real thing it is a bit more justifiable…also more convenient on a Thursday night.

Preheat the oven and pizza stone, if using one to 400-degrees.
In a dry skillet, toast the pistachios over medium-low heat for about 5 minutes. Stir regularly. 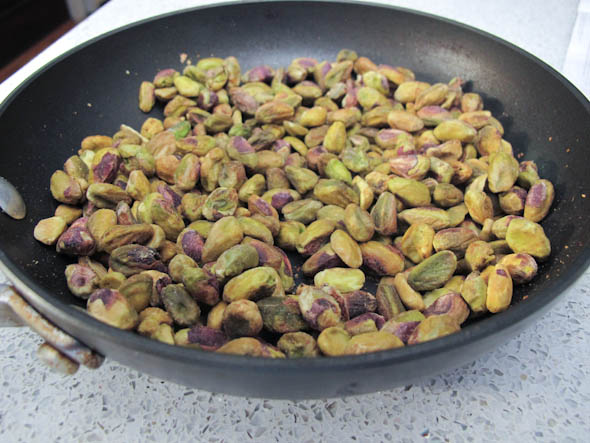 Spread the dough out to a very large, flat circle. Then put onto the hot pizza stone so it stops from shrinking back down in size and poke a few holes into the crust with a fork or knife. Then bake for 5-10 minutes – just until lightly cooking and beginning to brown.
In a large skillet, fry the sausage over medium heat with the casing removed. Break into chunks with the back of a wooden spoon.
In a food processor, add the toasted nuts, salt, pepper, and half the oil. Pulse and stream in the rest of the oil. Taste & adjust as necessary.
Spread the pistachio sauce onto the pizza dough. 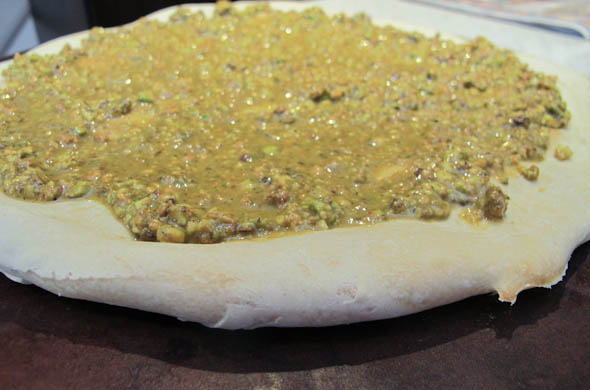 Then top with sausage, tomato, and mozzarella. 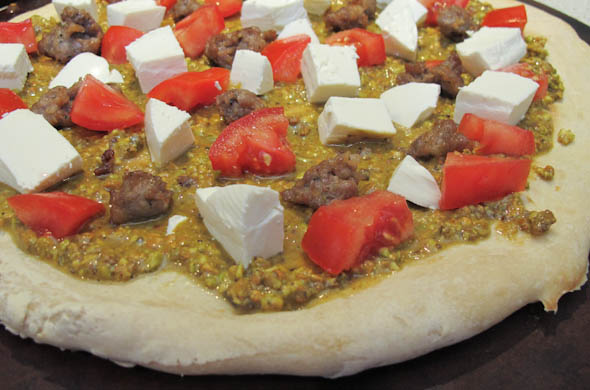 Bake for 5 minutes, then broil for another 3 minutes or so. Watch it under the broiler!

Let it sit a few minutes before slicing…otherwise you’ll lose the cheese.
Enjoy!

I liked the bubbly cheese with the pistachio crunch and the salty sausage. I probably should have added a fresh herb either into the pistachio sauce or onto the top. That was my goal with the tomatoes, but it could use a bit more of that. 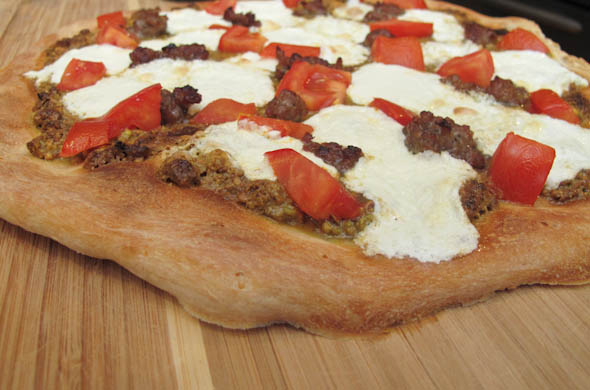 I went heavy on the pistachio sauce since I figured if I bought this whole bag of shelled pistachios, I was better off using them instead of saving some and then forgetting about them hiding away in the cabinet. Less of that would have been fine, or some dollops instead of spread all over would be good. The little one was snoozing so I contemplated toasting the nuts and just chopping them up as a topping instead of as a sauce but I stuck with the original plan and the food processor didn’t wake him up.

I’ve been using a half of a ball of pizza dough to make pizza now. It makes for a much thinner crust and cuts down on how much dough we’re eating. It is mostly a measure of preference for reallllly thin crust but the health benefit doesn’t hurt either.

One thought on “Pistachio & Sausage Pizza”