I bought a Groupon for Crazy Dough and after some time went by, all of a sudden, I realized it was about to expire! Literally, it was the last chance so Mr. J and I got it for a weekend lunch. It was about 2:30 so I contemplated if we were old farts and it was early-bird dinner or if we were fashionably chic having a late lunch. 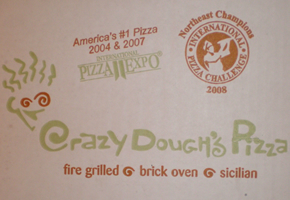 Mr. J gets Crazy Dough for lunch sometimes and loves it so I was excited to try it. The menu looked great. I was intrested in a few I knew Mr. J woudln’t be as excited about so we each got our own personal pizza.I thought the Eggplant & Roasted Red Pepper sounded good. Tuscan Tomato Basil caught my eye. It was Balsamic Glaze and Ricotta that I came back to on the menu. 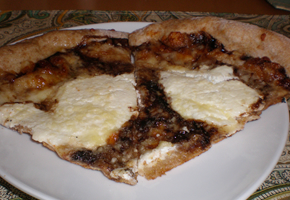 Mr. J loooves the Potato Bacon Cheddar pizza but decided to change it up with Chicken Parmasan.Maybe because we got it to go, or maybe because we got traditional instead of Sicilian, but I wasn’t amazed. I popped into the Harvard Square to pick it up and was so excited as I passed the slices of Sicilian. I thought mine would be just as delectable.

The Balsamic Glaze and Ricotta on wheat dough was thin with crispy crust. I thought it was too thin. The balsamic glaze was good, but nothing to write home about. I thought it was flavorful but needed more to absorb it. It was too runny since there wasn’t much cheese or crust. Apparently my pizza was finished with olive oil and fresh basil…I missed that.

The Chicken Parmasan wasn’t anything stellar either. The chicken was in tiny pieces. I prefer to be able to see that the chicken is white meat and not mystery leftovers. The sauce was too sweet…too ketchup-y. 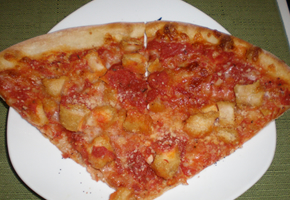