My idea for these stuffed peppers was an adapting one, get ready. You’ve been warned…

I got peppers on sale at the grocery store. I always check out the discount produce. There’s so much good stuff for a fraction of the price. I got 3 peppers (red, green, yellow) for a buck-something. Crazy. Thus, here’s the foundation of this meal. 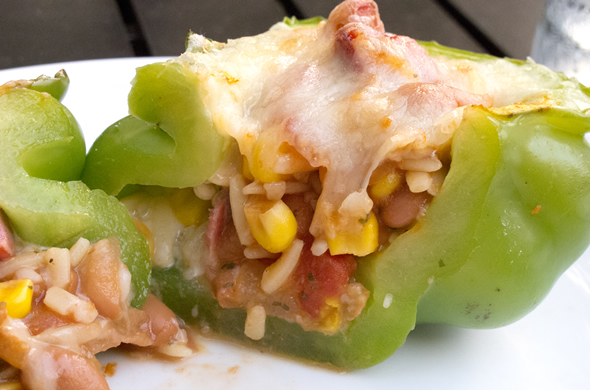 Then, I wanted to get out of making rice. I think it is just annoying how long it takes. It gets sticky and the pot is obnoxious afterwards. I know, first world problems. I also didn’t have any rice around anyway, so it was a moot point. I had used up the couscous making a Shrimp and Couscous Salad (with the yellow pepper from this trio of peppers) so that wasn’t an option either. I wasn’t feeling the red quinoa I had around. That pretty much rounds out the options except then I spotted orzo and thought that would be fun. #winner

I added beans because a) they’re good for you and b) the beans would make it filling and I’d add less orzo which does nothing for you. The beans get the credit for started the Mexican twist.

I skipped the ground meat because turkey kielbasa is smokey and almost like chorizo, just not spicy. I thought it would make dinner feel a bit different too. This would be a really great use for the many scant packs of ground meat I freeze. I don’t usually want that meat to become a burger anyway so Mexican often wins out for their fate.

Hmmm. That’s it. I guess that’s where dinner came from. I made wayyy too much filling for just 2 peppers (4 halves). It became a sort of weird lunch the next day.

In a large pan over medium heat, fry kielbasa and onion in a tablespoon of oil until the onion starts to get cooked through and more transparent. (about 5 minutes)
Boil water for orzo. Add orzo and cook until totally cooked.
Preheat the oven to 400-degrees.
Add corn, beans, tomato sauce, salsa, taco seasoning to the kielbasa and onion pan. 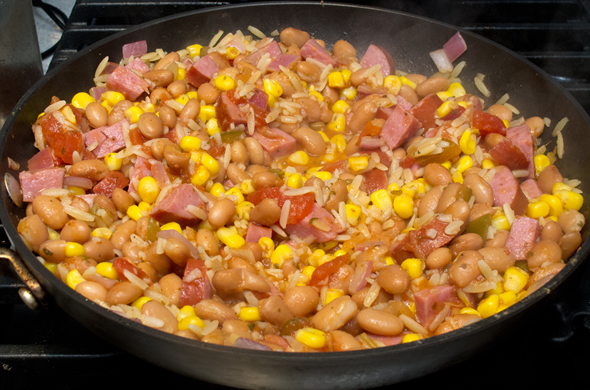 Drain orzo and add to the pan with everything else.
Stir well.
sprinkle half the cheese into the the peppers.
Spoon the filling into the peppers. 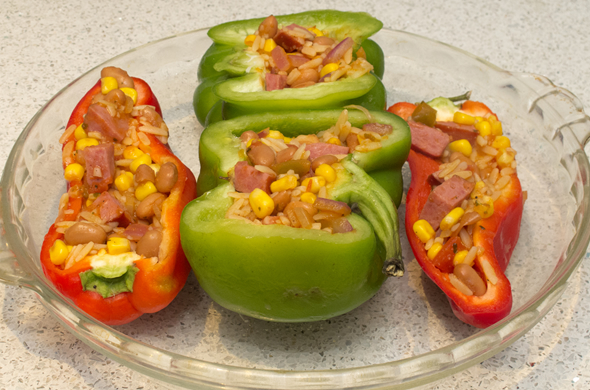 Bake for 15 minutes, then top with remaining cheese and bake for another 5 minutes. 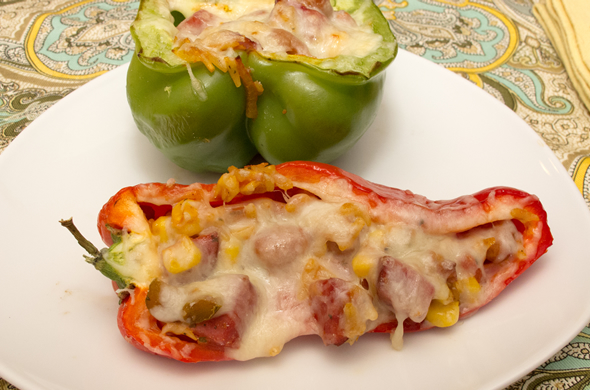 These were good, but not exactly life changing. I liked all the flavors and they brought a nice freshness and to the weekly meal schedule. The stuffed peppers were filling and not too heavy since there was just a tiny sprinkle of cheese. I liked the colors and textures. I don’t hate 1 pot meals either.

I think stuffed peppers are just a bit hard to eat. The red one was thinner and ended up being better than the green one.

One thought on “Mexican Stuffed Peppers”