We went back and forth about what to do for dinner when we were in Florida but it’s not an area where we could wander and peruse menus. We spent the day strolling a wildlife refuge peeking at gators and the rest of the day we were on the beach. For dinner we started with mojitos. I got a great blackberry mojito and Mr. J had a super refreshing cucumber mojito. 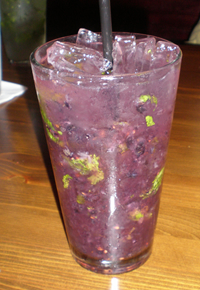 Mr. J spotted a few menus but was undecided and I was in the same boat. I saw Caliente Kitchen which was right across the street so we ended up there.

It was such a fun dinner! We both really enjoyed it and were happy with the choice! 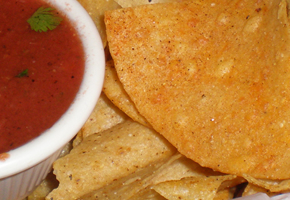 Good thing the chips weren’t bottomless because they were so good we could have kept going! They were fresh and had the greatest seasoning. I think it was chili powder and cinnamon. YUM!

I took my cue from the beautiful beaches and couldn’t get enough seafood. I chose shrimp tacos with a cilantro dressing. There was a nice zest to the sauce and I loved them. I don’t get enough fish tacos. 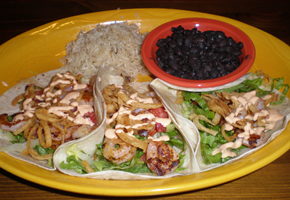 Mr. J got traditional beef tacos. He thought they were good and enjoyed the whole thing. 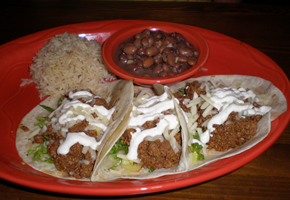 It was a great last vacation meal before heading back to Boston.