While I’m in NYC working an event I’d like to reintroduce you to Miss Liz.

Miss Liz writes:
For the last few months, I have been the de-facto “party planning committee” work (Me-physician assistant working at at hospital-this will be come important later). Collecting money=annoying, but menu planning=fun. Well, one of our physicians left for a fellowship position last week, so I made trifle, which is one of my specialities. 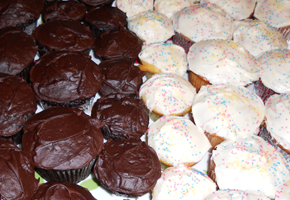 But this presented a problem because I really couldn’t make the same thing for another physician’s going away party this week. Someone suggested cupcakes but I wasn’t completely sold on the idea. The next morning during rounds, one of our physicians is eating a frosting filled donut (Yes, physicians eats frosting filled donuts for breakfast and then talk to you about diabetes and heart disease!). The donut inspired me, why not try filling cupcakes with frosting? 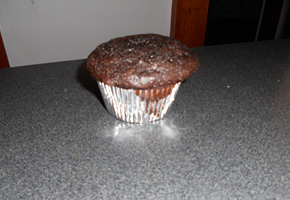 Overall, it was actually very easy and went well. I used boxed cake mixed and make the cupcakes as per the box.
After they cooled, I used a knife to pop the top off, then with a pastry bag filled with frosting I injected until the top of the cupcake bulged. 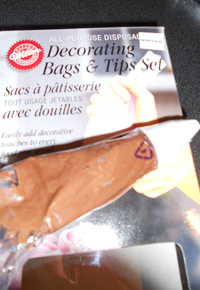 Then I frosted the cupcakes as normal. Everyone loved the cupcakes and thought they were so fancy. Its a great easy and fun dessert especially if you need to take it to go! 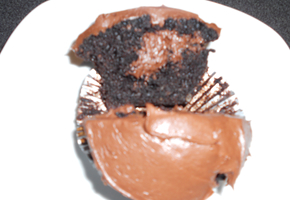 One suggestion-I made two batches chocolate and vanilla. The vanilla cupcakes were considerably smaller and I had a harder time getting the top off. So next time, I would air of the side of making bigger cupcakes.

I also made mini-cupcakes. These are great and remind me of my childhood, when my mother would make small muffins for us which we called “baby girl muffins”. But I didn’t even attempt to fill these! I use this all the time, mostly for brownies. I know it sounds crazy, but I prefer brownies from the box. So, i just spray the tray with pam and bake. When the brownies are done, you don’t have to cut anything and it makes serving very easy!
Thanks Miss Liz! If YOU are interested in being a guest blogger email emily@thethreebiterule.com!