Succotash is such a fun word and made me really excited to make it since I’d never had it before. Announcing this made Mr. J’s jaw drop which made me even more excited to make this chicken & succotash meal! 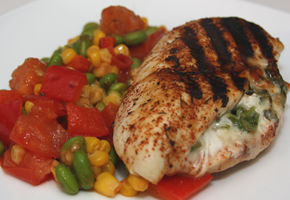 Sometimes I dream about when I won’t live in an apartment and I can have a normal kitchen, or when my puppy can have a yard, and especially when I can have a grill! That sometimes might actually be quite frequently. I promise the dog he’ll have his own yard all. the. time.

This dinner is pretty good inside but would be amazing on a grill outside too. The chicken is stuffed with pepperjack cheese and spinach with a zippy spice on the outside. It’s served with succotash too. 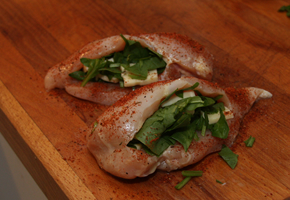 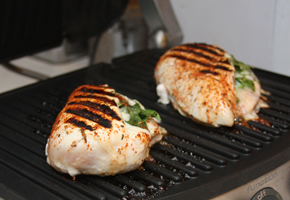 Meanwhile, saute edamame, red pepper, corn, for about 3 minutes and then add tomato. 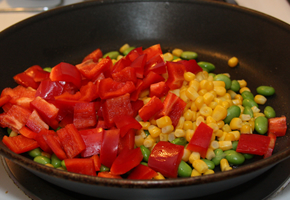 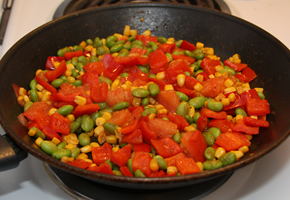 I got this recipe from The Food Network Magazine awhile back. I use spinach instead of argula like they recommend. I also did edamame instead of lima beans and threw in the red pepper instead of summer squash and thought it made it wayyy better.

Funny story. I always stop by the reduced produce, don’t judge, and I thought I was grabbing a bag of cukes & zuccs. I figured the store employees don’t know the difference. I got home and had lots of cukes but no zucchinis. This is kind of like the time when they didn’t know how to label prosciutto and charged me the bologna price. Score! Anywho,  I also got a steal on red & orange peppers (4 for $1.77!!). The cashier just entered the pepper code and it would have been $5-something if I wasn’t watching. I felt like I was on extreme couponing!!

This is an easy & casual one that would definitely impress friends with only a few pans OR deviate from the norm of your grilling menus this weekend!

One thought on “Fun to Say and Fun to Eat”