Woo-eee! December was bus-y! We loved it all. Dinners were more minimal to keep us up with social commitments and shopping and doing all the things. We listened to Christmas music non-stop until just the other day. Santa came while we were sleeping and the kids got to see their new things then we went to my side of the family for the day. On the 26th we headed to Maine and had a few days with the family there. It was all really special and fun. Getting home, I was ready for some more careful food portions, fewer treats, and more workouts & movement.

I don’t have a post-holiday down feelings. I love to move onto winter decor and wrap up a fun Christmas. I’m in the process of un-decorating from Christmas and finding a home for everything. Mr. J and I are gearing up for our traditional sliders, shakes, and champagne for NYE!

This season neeeeds a Winter Veggie Grain Bowl – customized as you wish! Mine had farro, butternut squash, zucchini, mushrooms, cheddar, dried cranberries, and a drizzle of honey mustard. It is hearty but not heavy. Trust me, this is a perfect fit to your January. 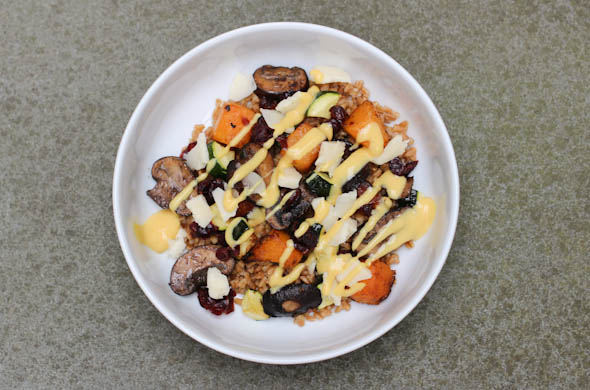 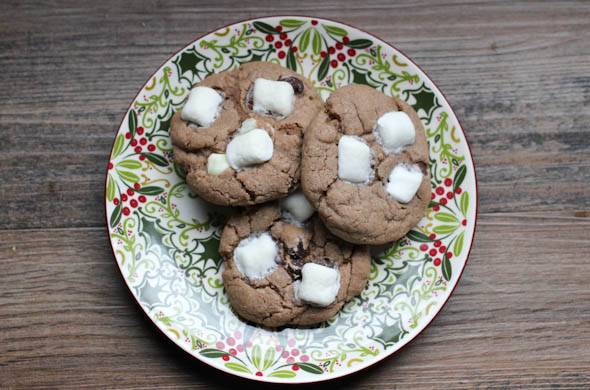 I finally posted about the finals for the burger competition.

January will have some fun foods. I have a series coming up and I’m prepped ahead which feels good. I over-indulged a bit over the holidays and didn’t sleep as well as usual. I’m glad have some slower days and be back to my routine before heading back to work.

The holiday season is magical at age 4! Visiting Santa was so fun and he was excited and brave! He got a Captain America costume, mask, and shield from Santa. He barely took it off since he got it. His other favorite items were dinos, his sister’s musical instruments, and headphones. Food-wise, he’s still into pasta but rice is out of fashion.

The little girl was a bit nervous to meet Santa but she held it together! She got a baby stroller for her doll. She loves it! Her other favorite items were a penguin winter hat, music instruments, and doll bottles. Food-wise, she loves dipping and eats almost everything we give her.

Year of beauty! I got reusable make up remover pads!
Prep intentional sides and veggies: I’ll keep at it.
Eat more fish: The kids are loving salmon with everything bagel seasoning.
Blog some series: Dec didn’t feel like the time to launch one. Hang on for Jan!
Focus decluttering/organizing to an area: Baby toys are on their ways to new homes!
Share more books on instagram: We hit the library a few times but I didn’t share much.
Prioritize workouts: I’m 65/100 through 100 morning meltdown.
What I’m reading: I loved Meet Me in Monoco for a lighter and sweet but interesting story.
What I’m listening to: Bachelor Party podcast has been counting down the most dramatic seasons. It is so funny to think back to some such a long time ago.
What I’m watching: all the Christmas movies!

I baked! It happens so rarely that I feel like it requires skywriting with “I did a thing”! In full disclosure, I did not make this recipe up but I’m not 100% sure of the origins. Ms. L gets all the credit as these are a staple in her arsenal of skills. I tweaked ever-so-slightly. They were great!

Preheat oven to 350-degrees.
Cream together sugars and butter until fluffy. Add eggs & vanilla.
In another bowl, whisk together dry ingredients. Slowly add dry ingredients to the butter mixture.
Add chocolate chips.
Roll into 1 inch balls and place on a baking sheet lined with parchment or a silpat. Bake for ~7 minutes.
Lightly press a few marshmallows in the top of each ball. Bake for another 4 minutes. Let cool for 1 minute on the tray, then on a cooling rack.
Enjoy! 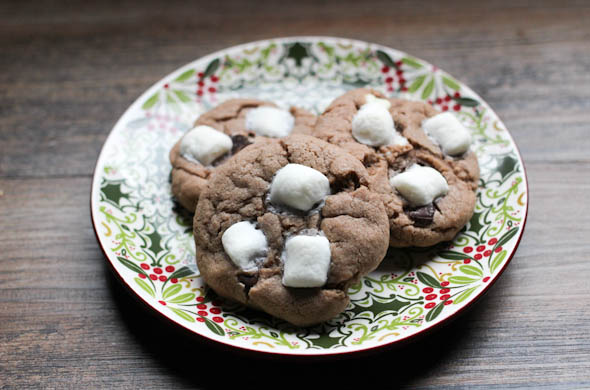 These were so good! I loved them and will definitely make them again. It seemed too mentally taxing for me to have 2 timers going for 2 rounds each so I just cooked 1 tray at a time. Had it been daytime, maybe I could have handled more than that.

They were perfectly cooked, and super cute amongst their cookie friends at a swap. I made 3 dozen for the swap and froze the rest to bake for Santa!

Wayyy back when, in mid-October, I had the final round of the Build a Better Burger Competition. Spoiler: I didn’t win, but it was really fun. 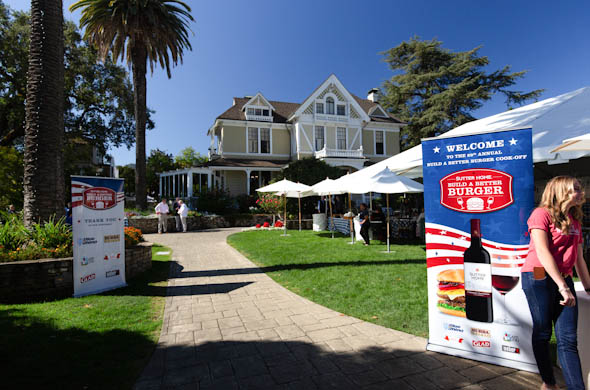 We flew home on a red-eye so I could be at a 9am meeting at work for a big event. Phew. It was such a whirlwind trip but I’m so grateful Mr. J and I got a getaway! I last went to wine country circa 2007 maybe? Mr. J hadn’t been and is now more into wine! Yay!

After wining the regional one in Boston, they didn’t immediately share a date for the finals (which I thought they mustttt have since it ended up being just 6 weeks later). I was really hoping it wouldn’t conflict with a big work event weekend. I ended up getting the flights & hotel stay, early and we left early, to get me back in time. The regional one was structured differently than the finals so I was always trying to nail-down details. Thankfully stars aligned for grandparents to babysit, availability at the kennel and time off work to get us to Napa!

Tuesday: Mr. J and I arrived in SF and drive out to our super cute hotel in St. Helena: Wydown Hotel. St. Helena is adorable! We popped over to Sterling Vineyard for a self-guided tastings and an aerial tram. It was fun but not the best intro to vineyards. It was a good chance to taste a few wines and to walk around at our own pace and see their vineyards from a gondola- after a day of flying and then a 2 hour car drive. We had dinner in Napa to stay up and adjust ourselves to the time difference.

Wednesday: We got up (early for wine country standards) and went out to see the redwoods about an hour away. It was awe-astounding and great to hike around for a few hours. Back in wine country and we grabbed lunch at Gotts Roadside and then we did a tasting at V. Sattui Winery. It was fantastic to have choices in what we wanted to try! I had a meeting with the other contestants to proof our ingredients and before a welcome dinner for the contestants and guests at the winery. The food was to-die for and it was so wonderful to really get to know the others in the competition.

Thursday: Competition day! I was all nerves. I took a walk and tried to just be ready. The 5 contestants had staggered start times alphabetically by last name. I was 4th! I had to present each of the six judges with half a burger in 60 minutes. Mr. J really tried to keep me calm. I was so nervous! 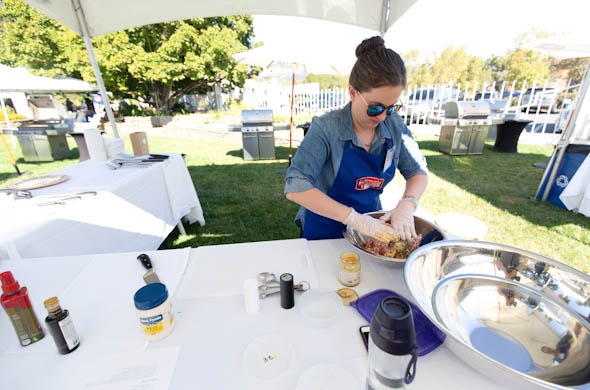 There was so much time- kind of too much time since the fried egg really had to be last. This round, they had to be sliced which was my biggest stressor. I was physically shaking for the last 10 minutes. Presenting to the judges was much easier than the final few minutes of cook time! The judges seemed to have really positive reactions for me. Their suggestions included toasting my burger buns and another suggested using a really Parisian stinky cheese. I’ll definitely take the note to toast the bun- I’m not into stinky cheese so I’ll stick with the swiss- or boursin would be good too! 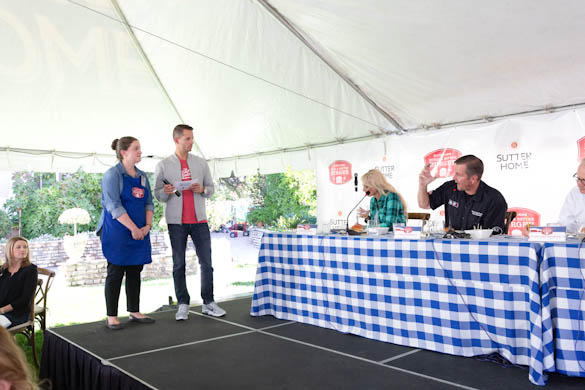 We cooked for the judges, and the culinary staff made our burgers for the attendees. Here was mine! Mr. J got to taste all the burgers. 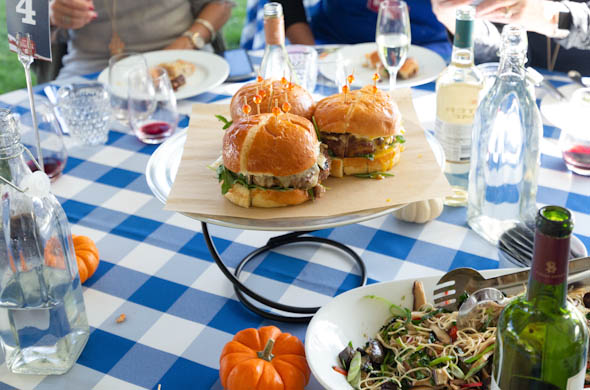 The woman who won was ecstatic. She was lovely and I’m sure she was genuinely thrilled. Originally we thought we’d hear 3rd place, 2nd place, and the winner but they just announced the winner. It was tough because with so few, we each felt like we could have won. I know it is subjective and what chefs/culinary professionals choose might not be what the average person wants. I was disappointed not to win and exhausted. I guess we can each assume we were each almost the winner. 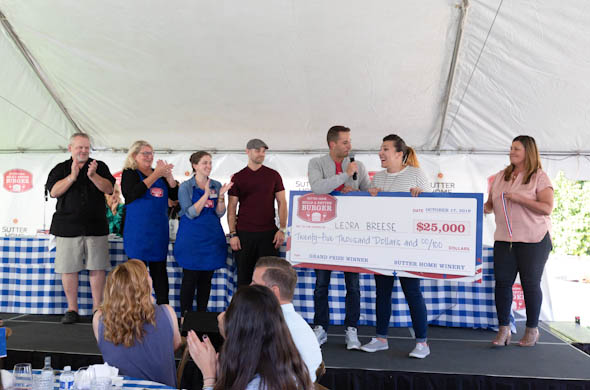 Then we headed to the airport and flew home on our first red-eye! Phew!

I did love doing it (though I’m tough on events that aren’t seamless – I’m lookin’ at you regional round! I wanted dates! I wanted details!) but I wouldn’t enter the contest circuit all the time. The stress and anxiety is real! The prize absolutely made it worth it and Mr. J and I would absolutely not have had a trip away without the competition. I literally entered hoping to maybe get some free wine out of the deal so I’d say I came out on top! I feel proud of what I did- each round I definitely made the best version of my burger I could and pushing myself to do something new.

Enter! Put yourself out there! You never know when you’ll get a trip to wine country when you were hoping for a just some free wine!

You know I loooove a grain bowl and this one was perfect for the season. It is totally vegetarian, nearly vegan, filling, fitting for the season and quick! Who doesn’t need more veggies and whole grains this time of year? The tart dried cranberries and the sweet honey mustard drizzle are ideal here. Making the farro in advance and par-roasting the veggies gives a great head start. 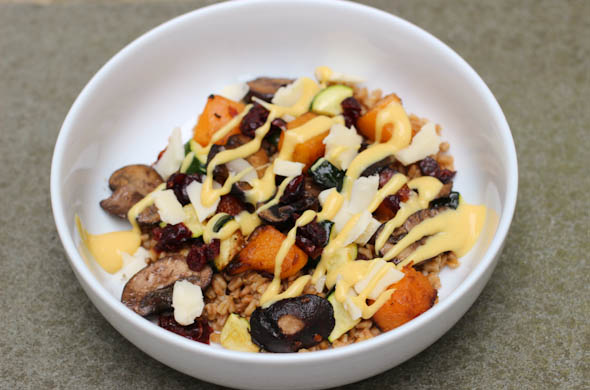 Add the farro and water/broth to a low boil. Cook for ~30 minutes until tender (or make in advance).
Preheat the oven to 375-degrees.
While the farro is cooking, peal and chop the butternut squash. Spread it out onto a sheet pan, drizzle with olive oil and bake.
Chop the zucchini and add to the sheet pan.
Bake for ~15 minutes, adding the mushrooms and sprinkle with salt & pepper to cook for the last five minutes.
Slice the cheese and break into crumbles.
Plate farro onto the bottom of the bowls or plates, top with veggies, then add dried cranberries and cheese. 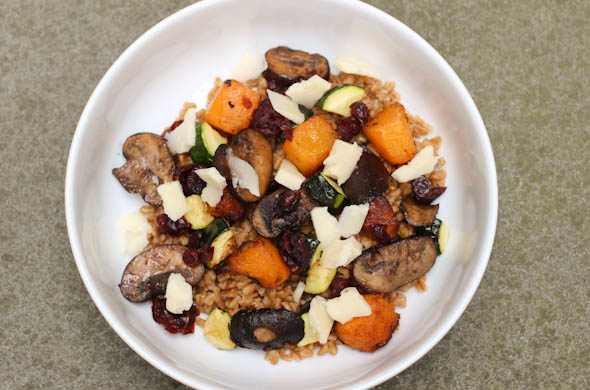 I really loved this one. The preschooler and toddler each loved it. The chewy farro has such texture with the roasted veggies. Swap the veggies for your fav and the drizzle of your choice. To me, the must haves here are the farro + dried cranberries + cheese. If meat is a must have, sausage or shredded roasted chicken would be good.