November wasn’t the month I spent the most time in the kitchen, but I think we did pretty well eating real food and being somewhat well balanced during a busy time. I’m ever so grateful to have a beautifully prepared lunch at work daily. Never having to prep or clean up is so amazing. I don’t think I got to eat quite as many pumpkin things as I would have liked, but there’s still time. Thanksgiving was so tasty and again I’m grateful to just show up and enjoy.

My fav dinner was Chicken & Golden Mushroom Slow Cooker served with arugula and pasta. It was so flavorful and lighter than so many other crockpot dinners. 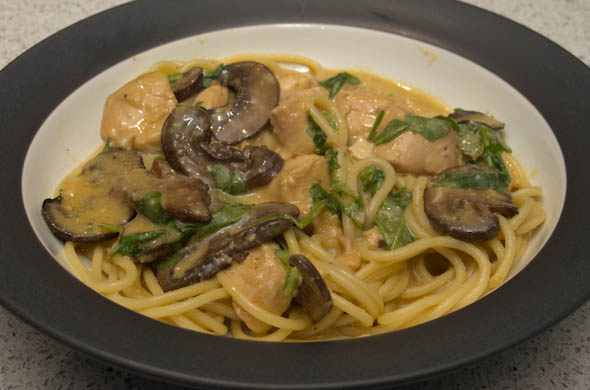 Finding chopped pancetta made me super jazzed. It was right there! Right next to the prosciutto. Who knew? I foresee it being very useful. Muhh-ha-ha. I paired it with pear for a perfect pizza. Ha! Ok. I’m done. Just make pear & pancetta pizza right away. 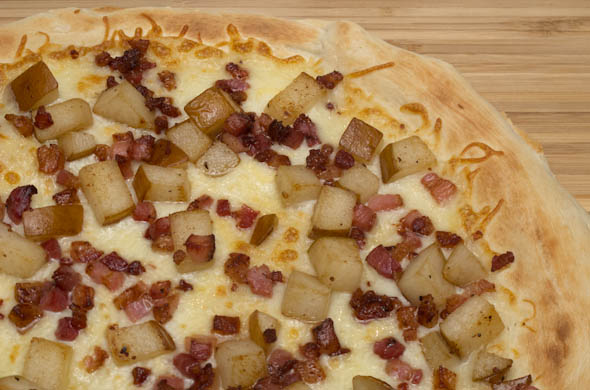 The Little One:
He’s such a happy dude right now. His current fav foods are meatballs, spaghetti, avocado, anything he can dip, and anything I’m eating for breakfast. Clementine season is always a good time of year in his life. We went out to dinner for Mexican and he loved it…he also enjoyed and devoured almost a whole bagel with cream cheese on a morning adventure. I can’t believe how much he’s talking now. A new fav word is: barking which comes out as “bawking”. He still loves “big truck”s. He’s gotten the hang of Please, but Thank You hasn’t stuck.

New goals:
Year of the Pajamas! I’m rethinking this. I’m so sad for the year of the seasonal decor to be done…I might want to do it again!
do more dinner prep more in advance: ehh. This didn’t happen this month.
read more: I kept up with the bookclub! We read Girl on the Train
cook more fish: ehh. This didn’t happen this month.
focus on clothes that I really like: I tried Thread Up and it was a hit!
monthly grocery store ingredient: I found some frozen cavatelli pasta which was so great for a quick meal!

I’m back! I was just too crazy to blog during my busiest time at work. I’m proud to say it was a success and now I’m super ready to embrace the season! I made this Creamless Tomato Soup as a super quick lunch that I thought was especially nice after a filling holiday weekend. There isn’t any cream or bread to thicken this soup and the white beans add that element with the bonus of some protein. Now you just need a grilled cheese! 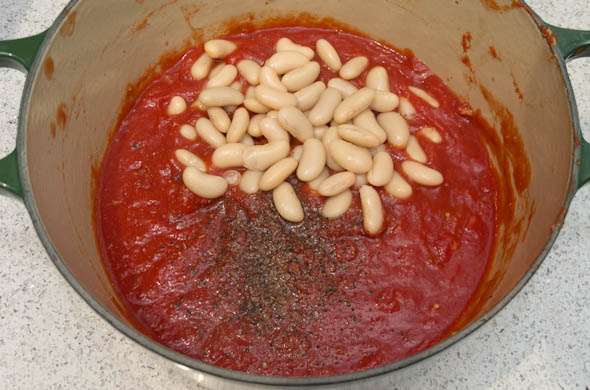 Saute the garlic in a little olive oil in a heavy pot, over low heat for about 2-4 minutes.
Add in the tomato paste, kitchen ready tomatoes, white beans, and salt and pepper. Cook over medium heat for 10 minutes.

Blend either with an immersion blender, or carefully labeled into a blender or food processor.
Return to the pot and add in the oregano. Cook for another 5 minutes on low.
(Optional: add in some veggie stock or water if too thick.)
Serve and enjoy! 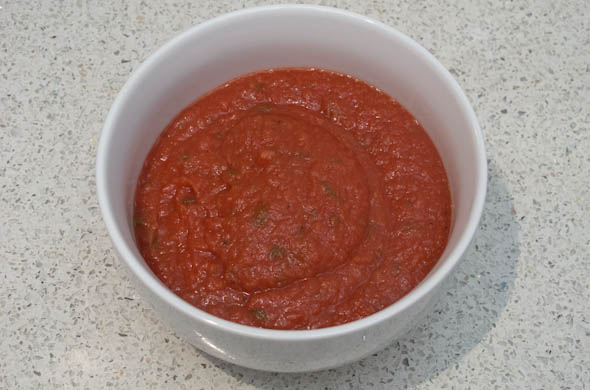 I think the herbs make this soup.

Salty pancetta and sweet pear plus melty cheese makes for such a wonderfully balanced pizza. That’s it. Pizza dough, cheese, pancetta, and pear. That’s it. So, basically dinner is brought to you by the letter P.

Preheat the oven and pizza stone (if using one) to 400 degrees.
In a large skillet over medium-high heat, cook the pancetta to crisp. Then drain. 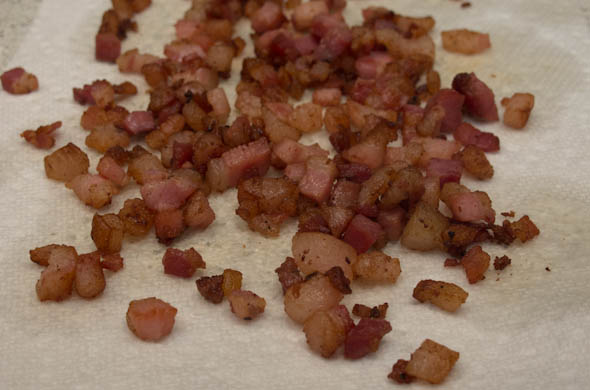 Spread the dough out onto a pan, poke a few holes into the dough. Cook for 5-8 minutes to lightly browned.
In the same pan as the pancetta, saute the pear for about 5 minutes over low heat just to soften a little. 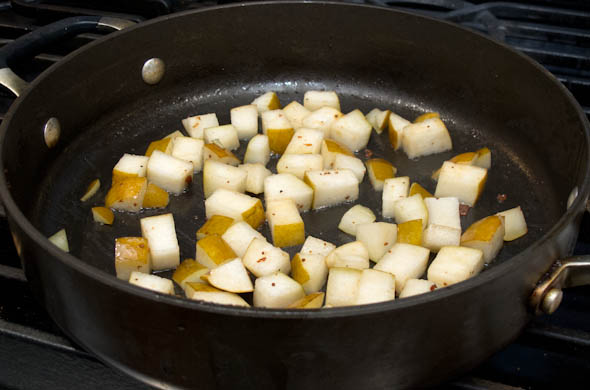 Then top the dough with cheese, pear, and pancetta. 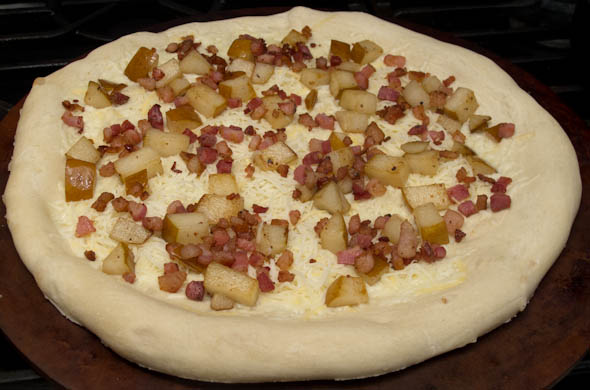 Bake for 5-8 minutes more until the cheese melts.

The little one picked off all the pancetta, ate that first, then the pears, then was full. I loved the sweet and subtle pear with the very salty pancetta. I’d totally make this again. Seriously, these few ingredients are just born to go together. 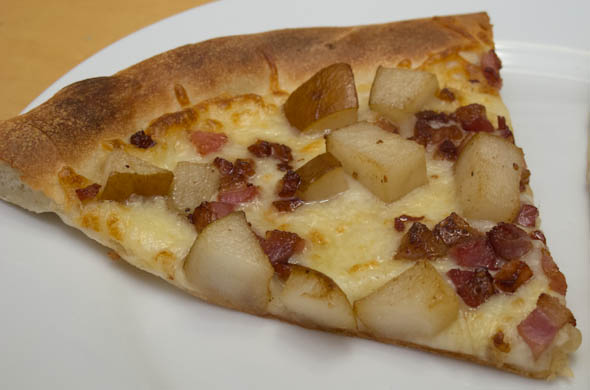 Six years? Woah! Crazy. It always creeps up on me. Once again, I have no idea what is in store for me or the blog but I wanted to take a moment to thank the blogosphere, thank readers, and think about the year to come!

My fav photo of the year: Cherry Cheesecake Yogurt Parfaits 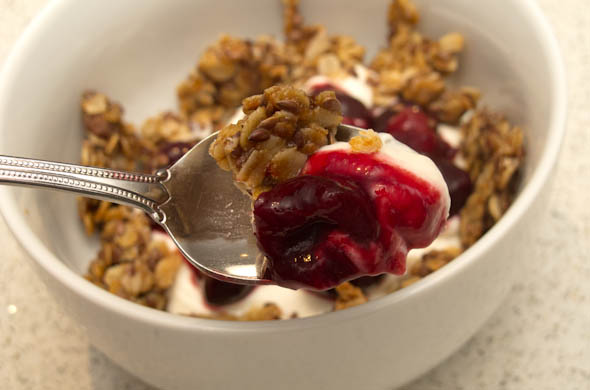 My fav burger of the year: The Ramen Burger! 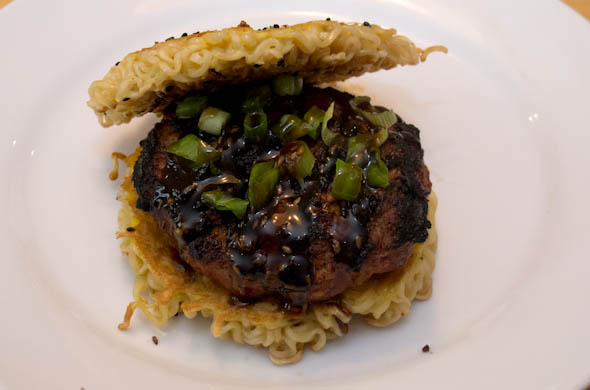 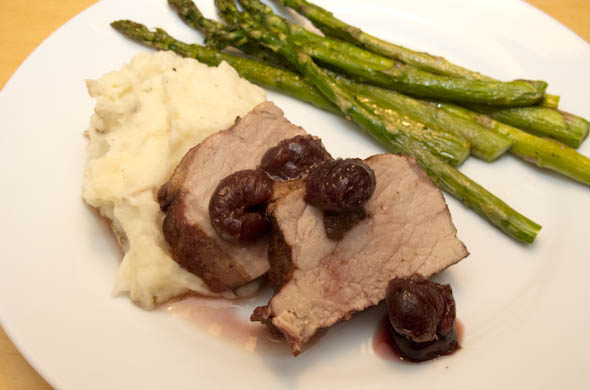 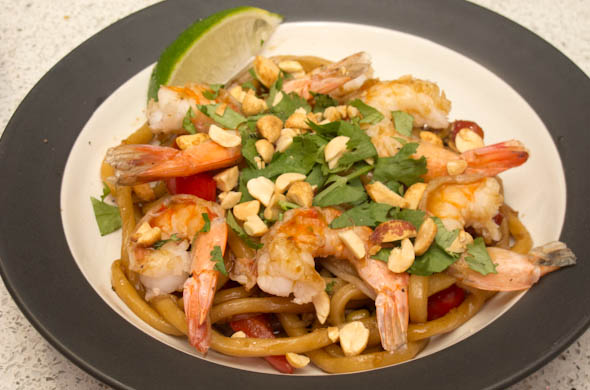 I loved a mini-challenge I self imposed for more creative breakfasts. If you pack lunch I’d challenge yourself to that!

How’d the goals go? They were good! I liked that they were pretty varied this year!

The Year of the: Seasonal Decor: this was such a great year of the…I might need to do it again!
do something a different way: always a good reminder.
drink more water: I could always keep this on the list. I’m not sure I quite got a perfect method for this.
make more interesting side dishes: I liked this since they’re often quicker than the main thing.
cook more soups & sauces: I didn’t make too many soups, but sauces was a good place to start.
watch more movies: this was a fun one! We get Netflix so I wanted to be sure to actually watch them.
make working out a higher priority: I ran a 5K! That was big for me!

And onto the next goals:
Year of the:….wait for it….Pajamas! I’m an adult and want legit pjs…not just pants and old event tee-shirts.
do more dinner prep more in advance
read more
cook more fish
focus on clothes that I really like
monthly grocery store ingredient, recreated 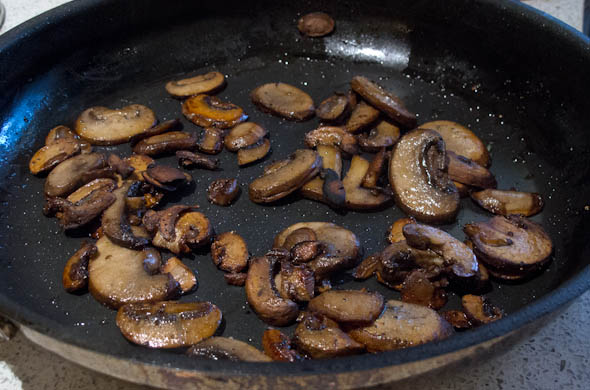 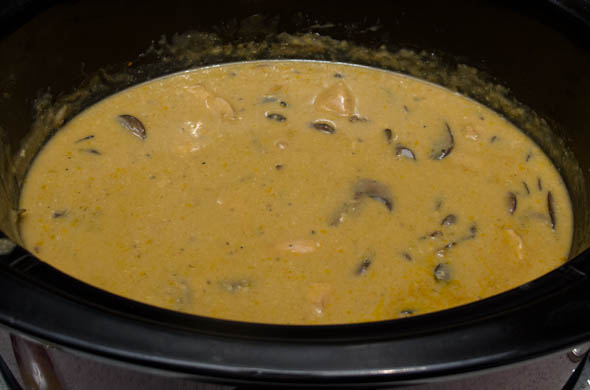 Polenta is the ingredient I always forget will provide the variety to a weeknight meal we all need. Rice takes forever. Pasta seems overdone. Polenta? Yeah polenta cooks in just a few minutes. I like it soupy to be spoon-able. I used pre-cooked turkey meatballs, zucchini and a really quick sauce. Poof! Dinner! 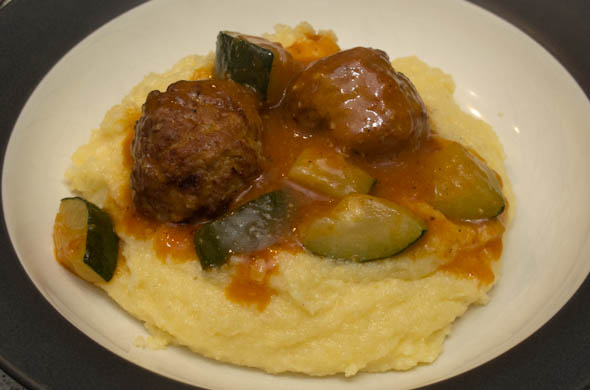 In a large skillet over medium heat, add the zucchini and tomato paste to cook for about 4 minutes. 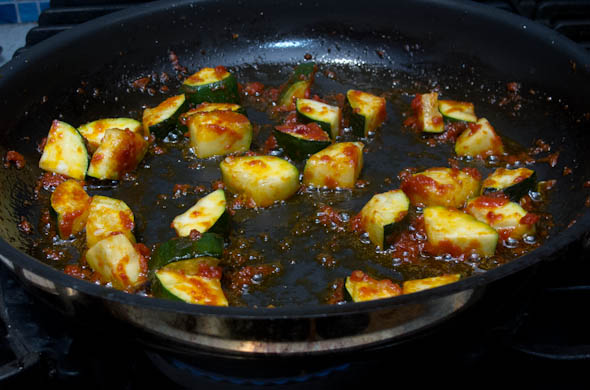 Add in the meatballs, 1 cup of the broth, and salt & pepper. Bring to a low boil and cook for about 8 minutes until broth reduces a bit. 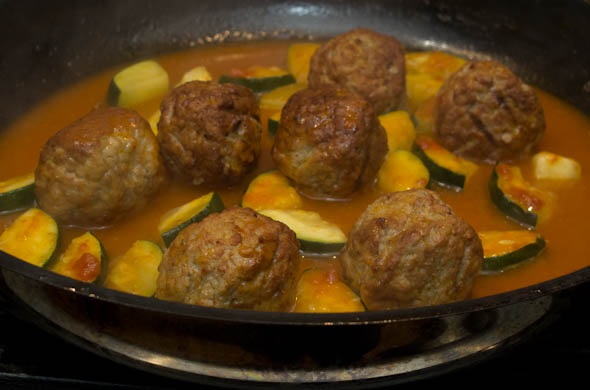 In a medium pot, add the polenta, butter, 1 cup of broth, 1 cup water and bring to a boil for 5 minutes.
Reduce heat to low and stir in the milk and cheese. 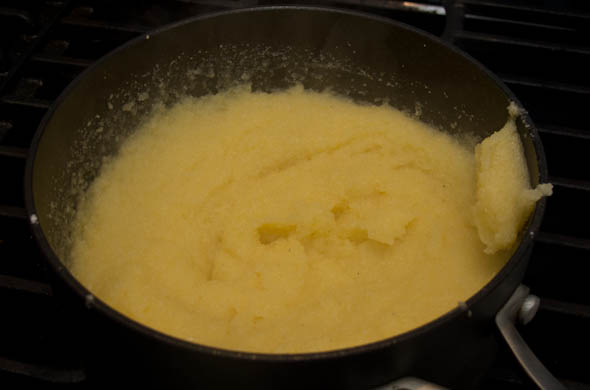 Spoon polenta in to the bowls, then top with meatballs, zucchini, and the sauce.
Enjoy! 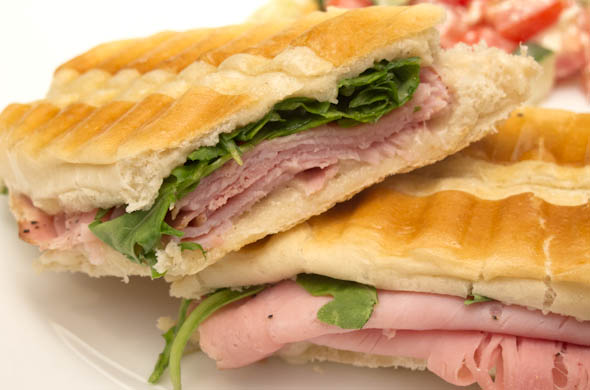 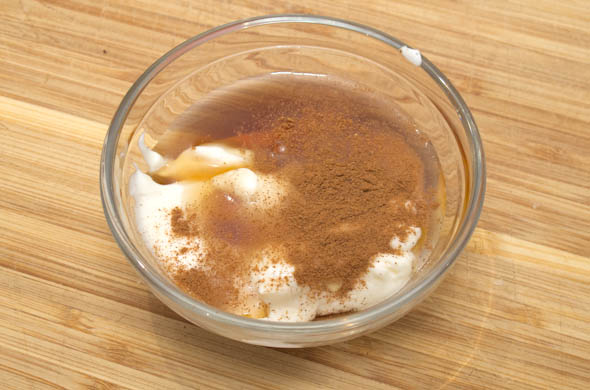 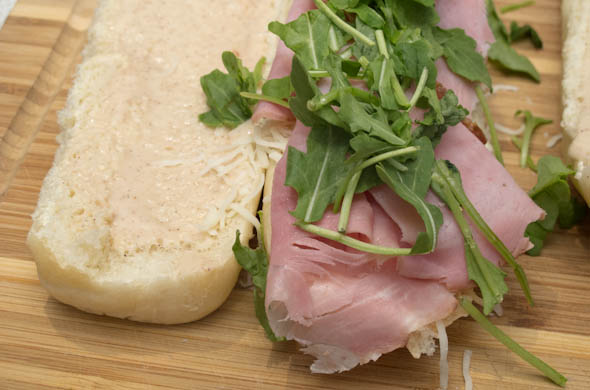